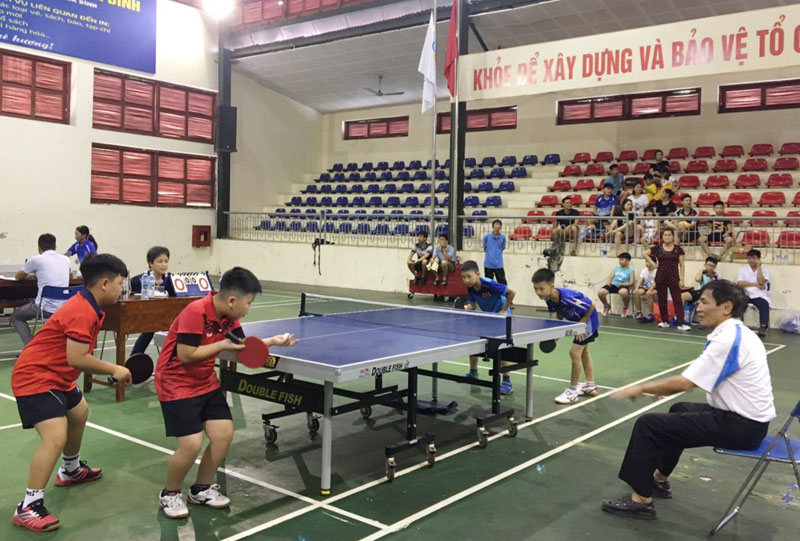 A match at the Hoa Binh Open Table Tennis Tournament for teenagers and children in 2020.

This year, the tournament is held in an expanded form, attracting the participation of 13 clubs with over 100 athletes aged 7-15 years old from inside and outside the province. In addition to the province's table tennis clubs for teenagers and children, there were also the participation of the table tennis clubs for teenagers and children from Son La, Yen Bai, Vinh Phuc, Phu Tho, Ha Nam, Nam Dinh, Hai Duong, Thanh Hoa, Ninh Binh provinces and Ba Vi district (Hanoi City).

It was the first time the tournament has been organized in an expanded form, so the preparation was quite hard. Not only that, the opening day of the tournament coincided with the final schedule of the Badminton Tournament for officials, civil servants, public employees and workers in the province in 2020.

This was the first time Hoa Binh has held the tournament in the expanded form, so it was quite nervous at first. The most worrying problem is the reception and the facilities and conditions of the competition. In terms of expertise, the Organizing Committee did not expect the achievements so much. They considered that it was an opportunity for "little" athletes to exchange, rub and learn experiences to become better in the following tournament. However, the competition process showed that the quality of expertise in each content, age, and between the clubs was quite equal. The athletes of Hoa Binh were not inferior to those of other provinces.

After 2 days of competing with the spirit of sport of solidarity - honesty - nobility, Hoa Binh Table Tennis Tournament for teenagers and children in 2020 was an unexpected success, leaving a good impression on all clubs participating in the tournament. The Organizing Committee of the tournament hope that in the coming time they will continue to receive attention and support to organize a larger and more expanded tournament for young racquets to have the opportunity to exchange, rub and gain the competing experience. Thereby, a foundation for table tennis in the province can be formed to reach high results in professional tournaments nationwide.