(HBO) - Currently, in the highland district of Mai Chau, not only Lac village (Chieng Chau commune), Van village, Pom Coong village (Mai Chau town) are the famous community tourism sites for a long time. Based on the advantages of the natural landscape, the national cultural identity, many other Thai villages, such as Nhot village, Na Phon (Na Phon commune), Hich village (Mai Hich commune), Buoc village (Xam Khoe commune) has participated in community tourism. In the process of formation and development, the community tourism sites have both well exploited their potential and they are constantly learning and building many new tourism products associated with preserving and promoting the traditional cultural values. Thanks to that, the destinations in the areas are attracting a large number of domestic and international tourists. 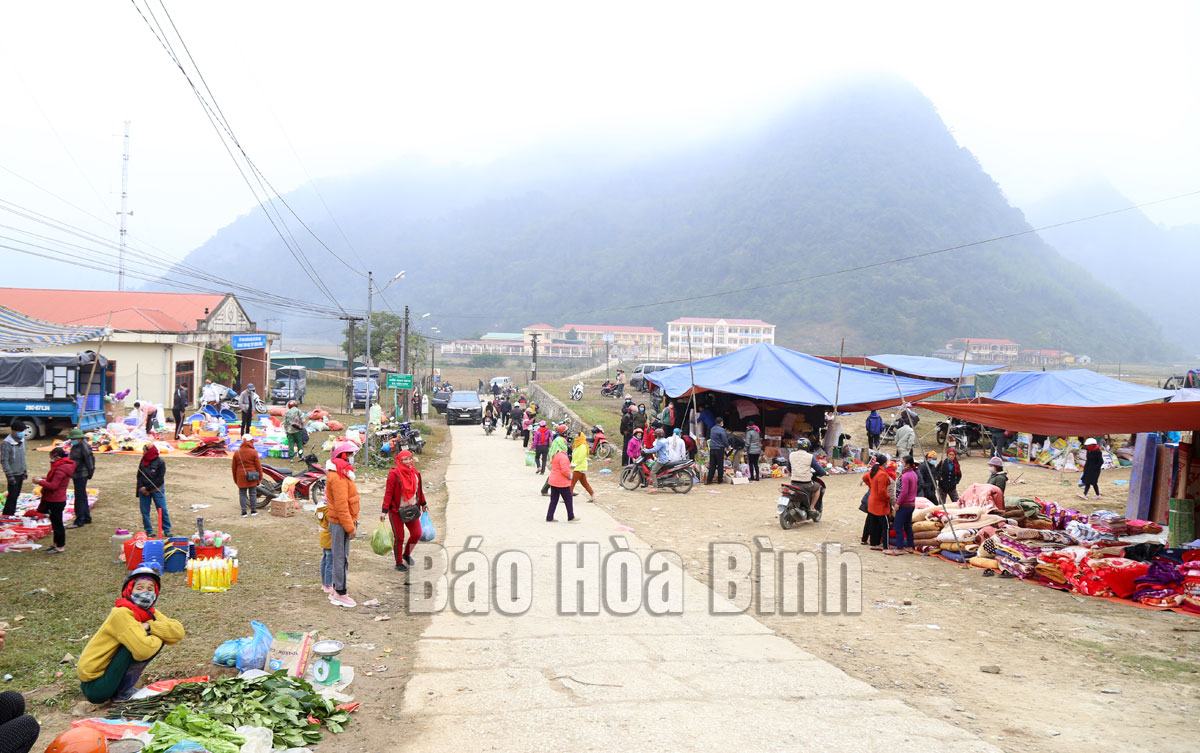 The impression of Van Son

(HBO) - We have the opportunity to return to Van Son highland commune, Tan Lac district with the impressive experiences. The market takes place once a week, on every Tuesday. The lush colors of the forests, chayote, mandarin and many other special things are so fascinating. 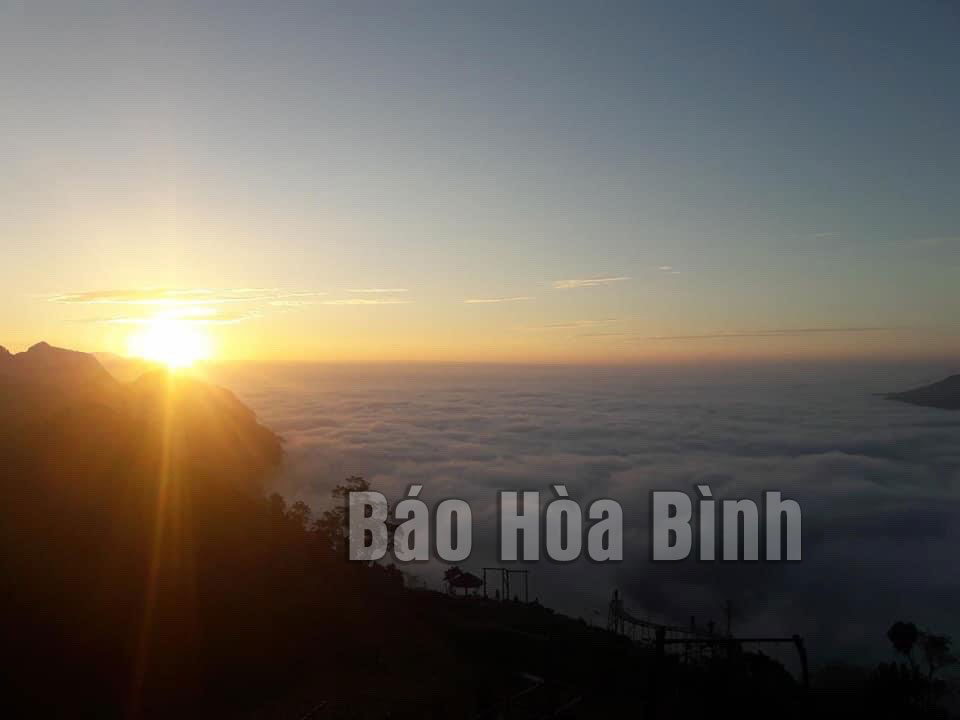 Lost in the “cloud hunting paradise” in Hang Kia

(HBO) Only 160 km far from Hanoi, the highland commune of Hang Kia (Mai Chau) is a cultural tourism destination of Mong ethnic group, attracting visitors thanks to its wild beauty and unique human resources. Especially, with a new discovery in a place where there are "waves of mountains, sea of clouds”, the harmonized nature, heaven and earth, Hang Kia is becoming an enchanting "cloud hunting paradise”. 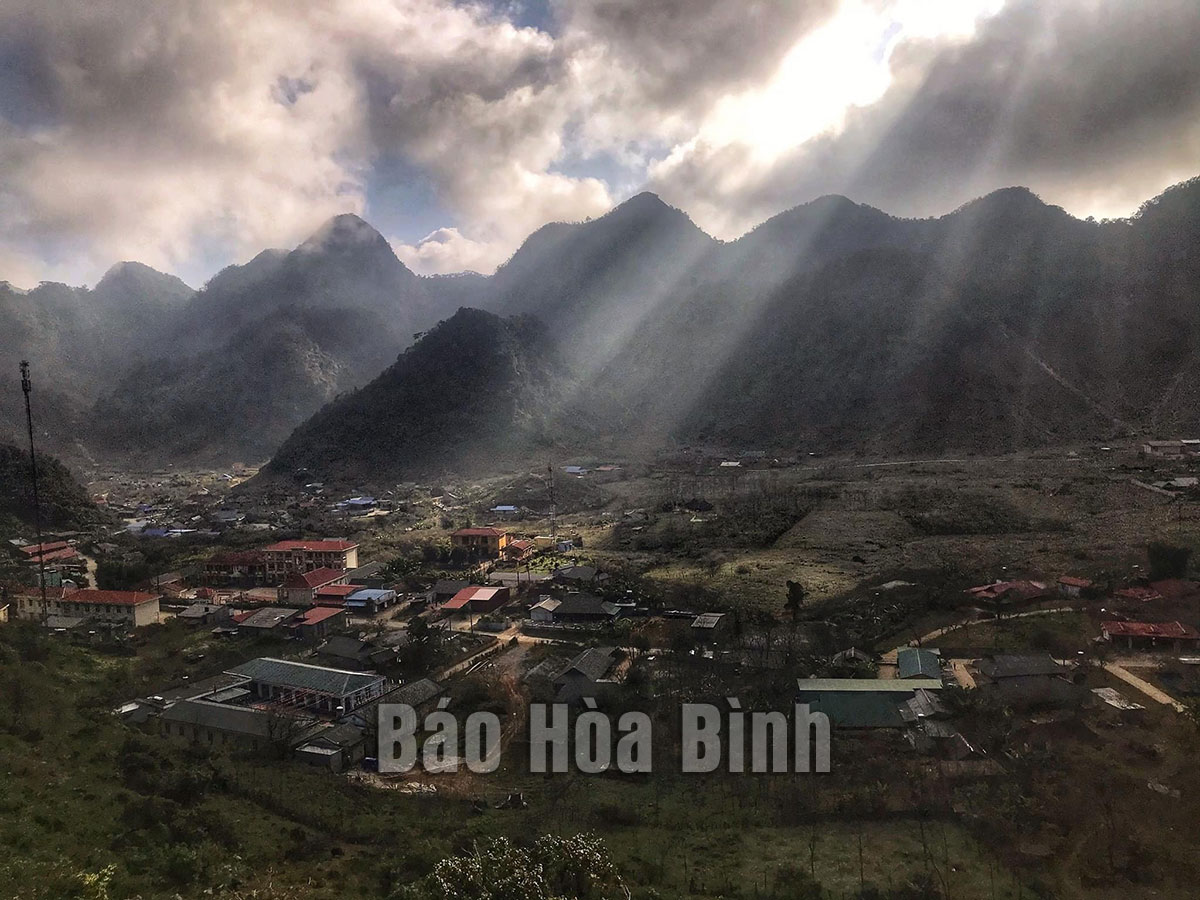 A glimpse of Hang Kia

(HBO) - Hang Kia commune (Mai Chau) lies entirely under a small valley. Reaching Hang Kia, visitors will discover the around roads and experience the unique features on the costumes of the people here. Meeting the small children, tourists will feel and see the natural and carefree features of the small children in the village. The panorama of Hang Kia commune is full of poetic beauty. It is the innocence and carefree of the children of Thung Mai village. The women of Mong ethnic group often make the traditional costumes with the bold cultural characteristics and they have become the traditional products attracting tourists. Visitors experience the traditional culture of the Hang Kia valley. 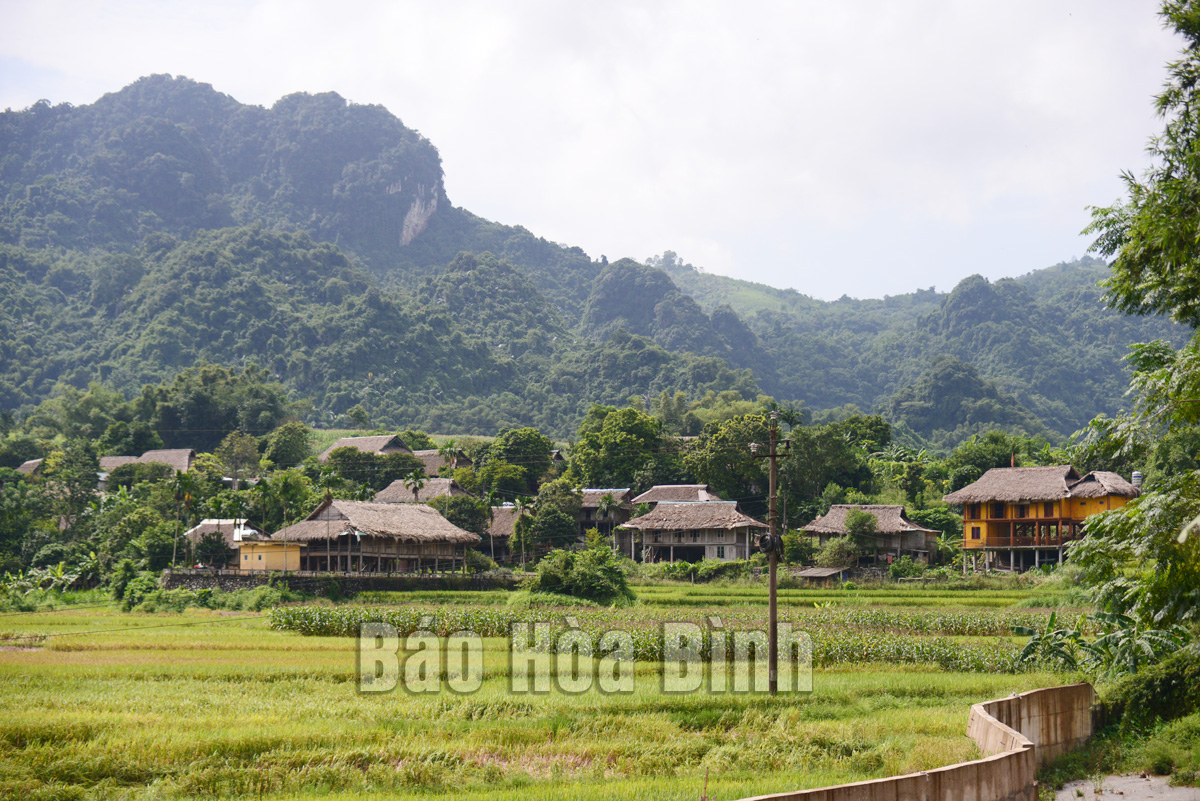 (HBO) - Giang Mo, a Muong village (now it is Mo hamlet), in Binh Thanh commune (Cao Phong) is located at the foot of Mo mountain, which neatly in a small valley, surrounded by the strolling streams. The village is located halfway up to the hill, the terraced fields that change color according to the season behind and in front of it. Fading behind the green trees, Giang Mo, a Muong village, appears as a beautiful picture along with the traditional culture of the Muong ethnic group that is sustainable over the time. The reporters of Hoa Binh Newspaper have recorded some pictures of the village. 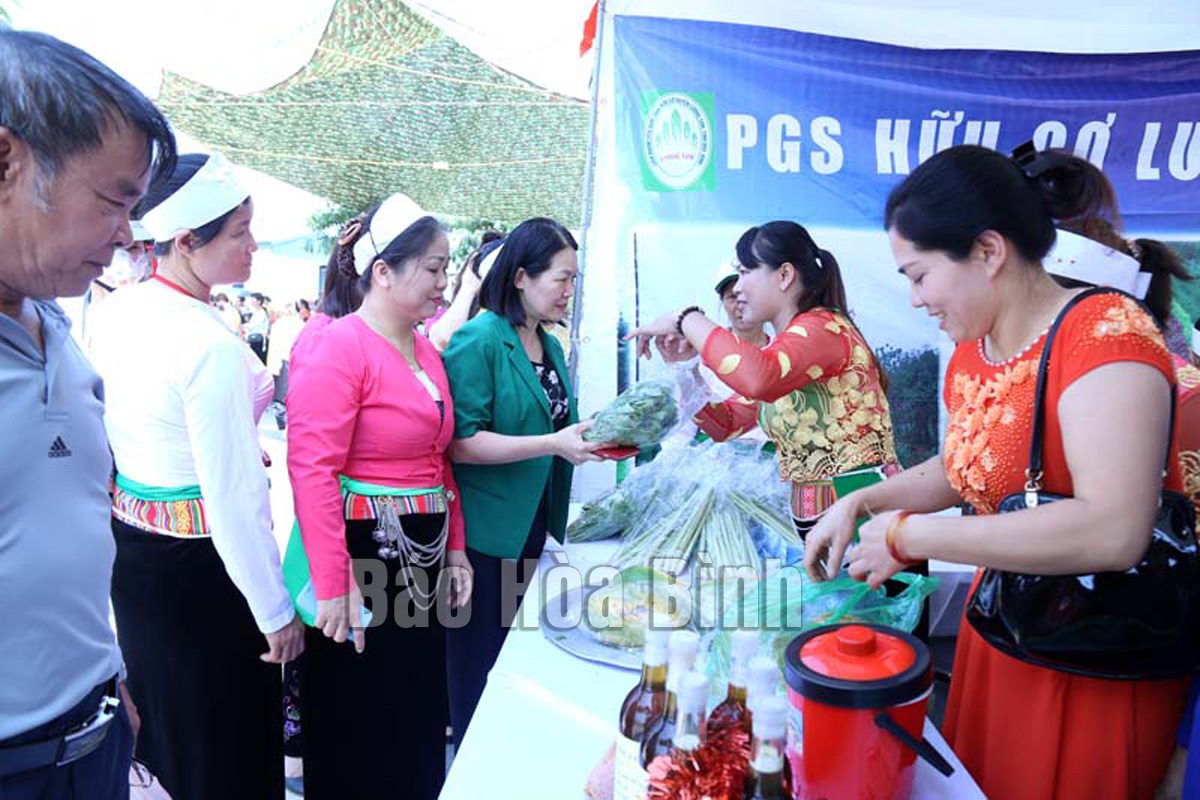 Some typical images of the Women's Unions at all levels in the province, term 2016-2021

(HBO) - The program "Traditional fair - Entrepreneurship stories for the ethnic minority women” has been organized by the Vietnam Women's Union in collaboration with the Provincial Women's Union in Luong Son district. 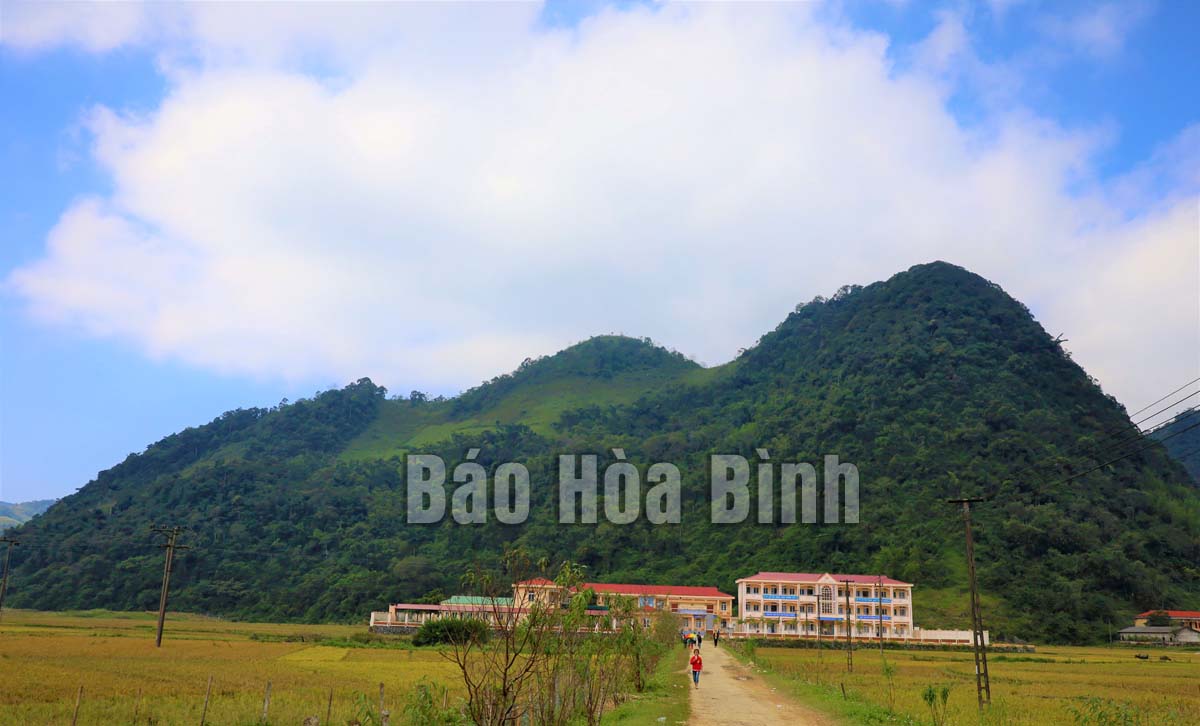 Discovering the fairyland of the highland, Tan Lac

(HBO) - Through the winding roads like walking on the cloudy steps, visitors have the opportunity to discover the natural beauty and life in Van Son commune (Tan Lac). This place has been considered to be a fairyland of the highland, giving visitors the feeling of being surprised by the wonders of creation and experiencing the unique cultural flavor of the highland. 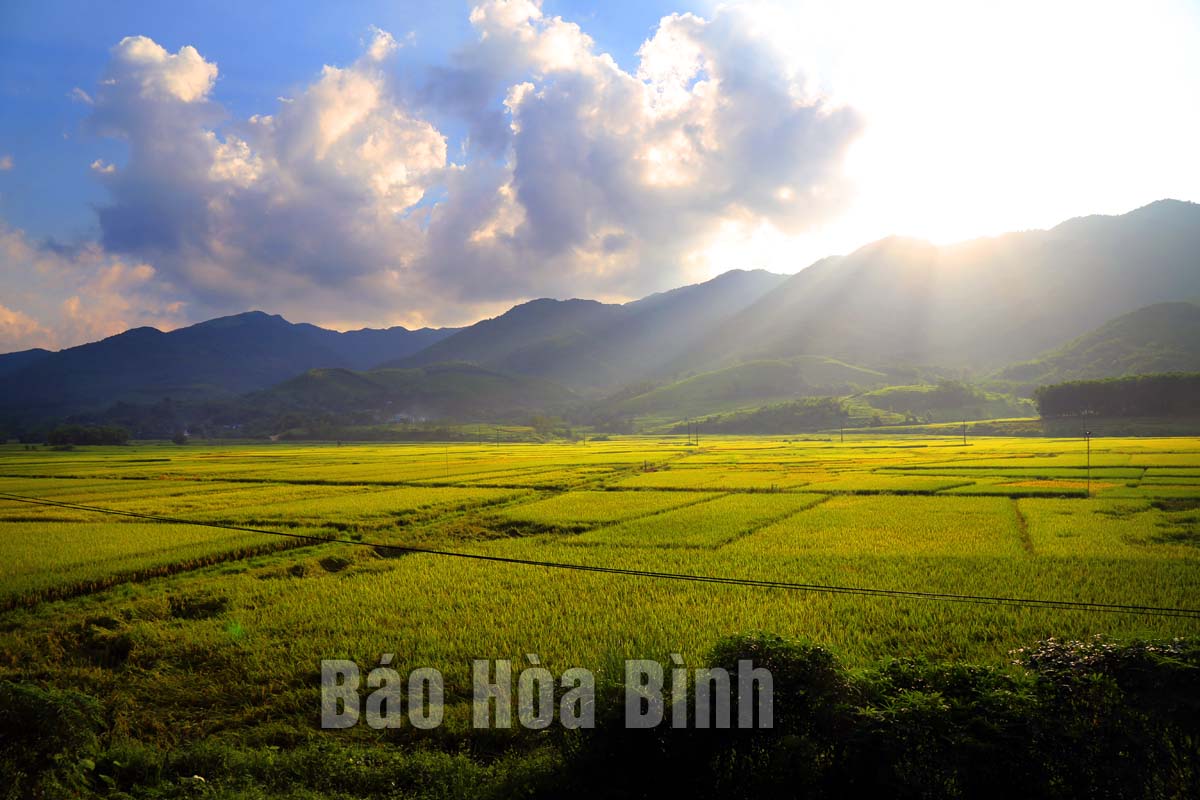 (HBO) - These days, taking advantage of the favorable weather, the farmers in Kim Boi commune (Kim Boi) are urgently harvesting summer-autumn rice crop. Walking on ripen rice fields in the golden sunshine and the cool weather of autunm; Feeling the joy of a farmer's good harvest… wonderful and peaceful moments! 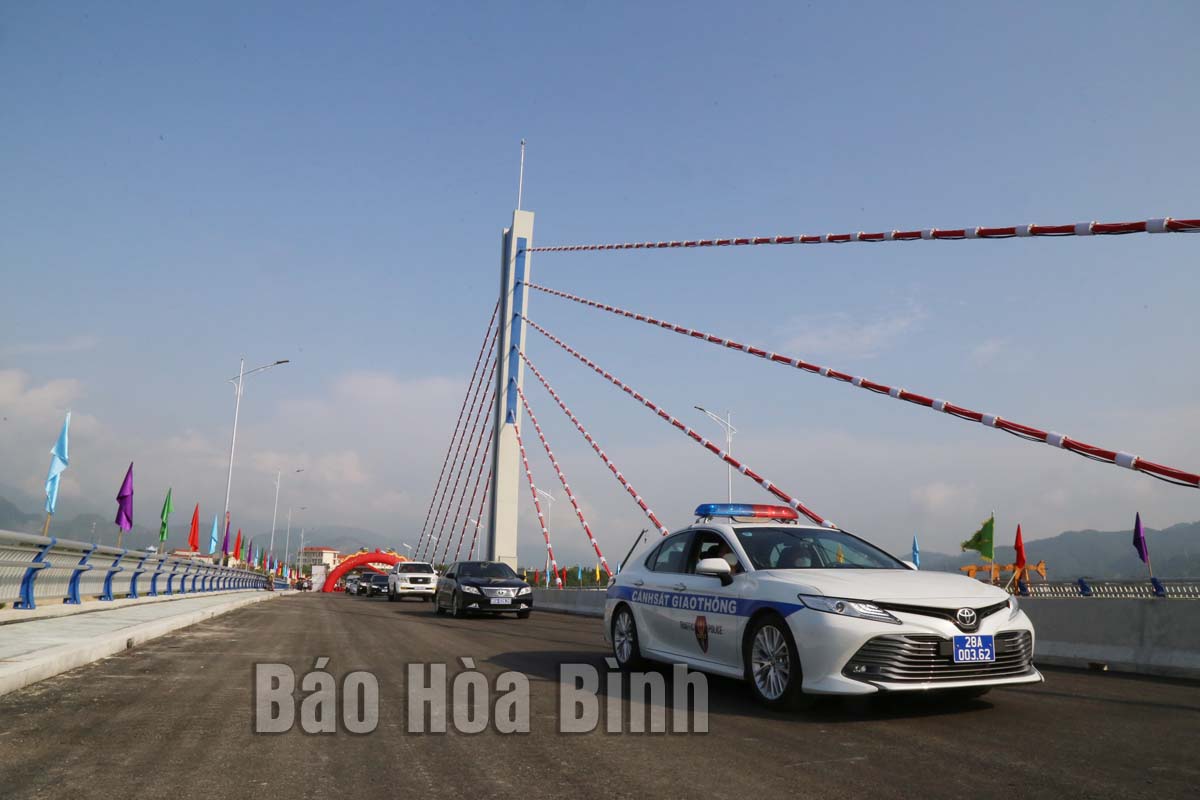 The technical traffic clearance of the project of Hoa Binh bridge 2: The government is excited, the local people are cheerful

(HBO) - In the morning of October 1st, in the joyful and exciting atmosphere of the Party Committee, the government and the people of all ethnic groups in the province to celebrate the 135th anniversary of the establishment of the province (1886-2021), the 135th anniversary of the re-establishment of Hoa Binh province (1991 - 2021), the Department of Transport held a ceremony for the technical traffic clearance of Hoa Binh bridge 2. After nearly 2 years from the time of the beginning of the construction, the project has been basically completed and the technical traffic clearance took place 8 months prior to the end of the contract. This is the overwhelming success of the bridge builders. 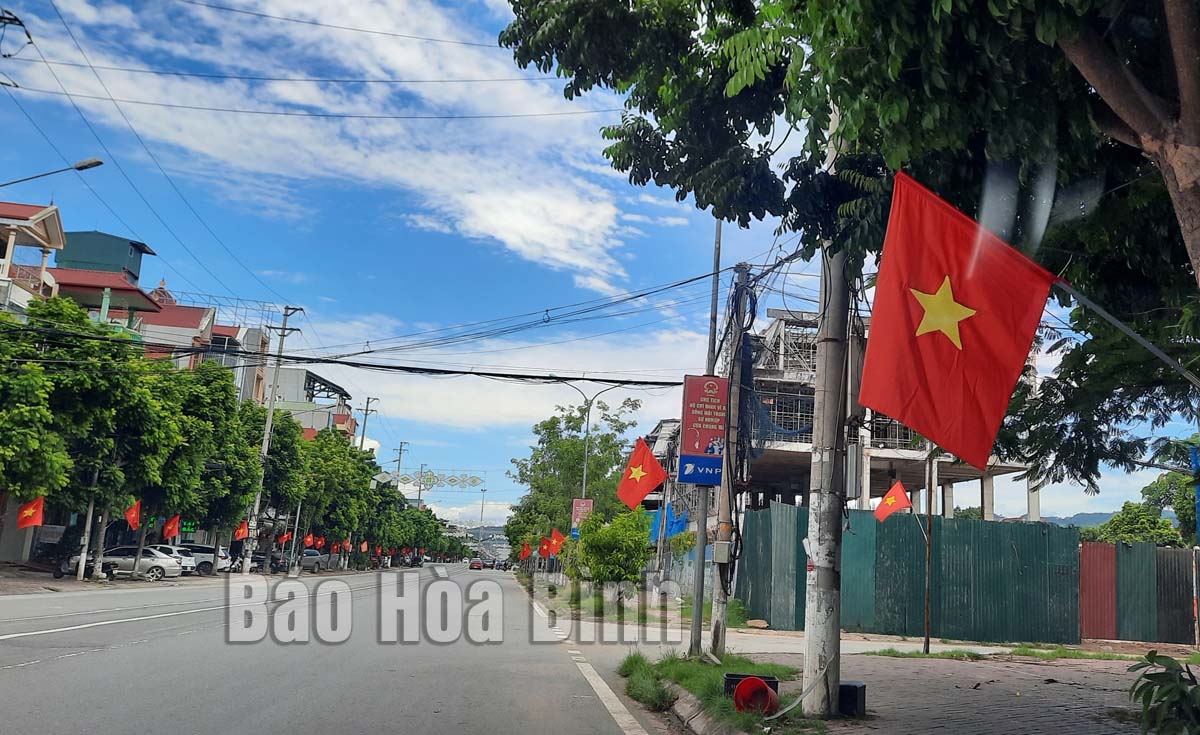 Being decorated with flags and flowers to celebrate the August Revolution and the National Day, September 2nd

(HBO) - During these days, on all roads of the residential areas from rural to urban ones, streets are decorated with colorful flags, banners, slogans, billboards... to celebrate the 76th anniversary of the August Revolution and the National Day, September 2nd (1945-2021). Here are some photos taken by Hoa Binh Newspaper reporters. 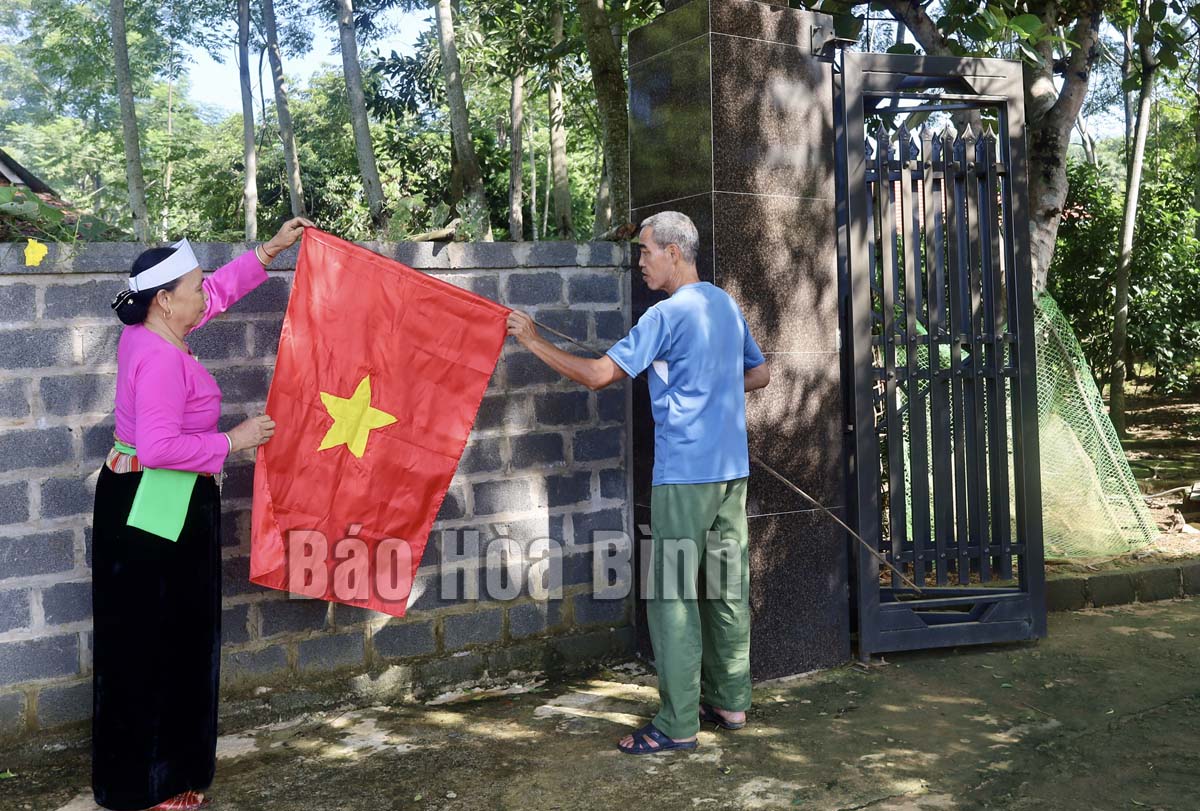 (HBO) - With the meaning of gratitude to the Party and Uncle Ho, celebrating the success of the August Revolution, praying for a prosperous homeland, a peaceful country, Muong Vo area, NhanNghia commune (Lac Son) always celebrates the Independence Day earlier and happier than other Muong regions. Welcoming a special Independence Day in the current situation of Covid-19 epidemics, without thetraffic jams and theguests bustling to celebrate Independence Day, thefamilies in Muong Vo, on the one hand, strictly follow the regulationsdetermined to prevent and fight the epidemics for the common goals, on the one hand, they still preserve and promote the identity of the IndependenceDayin each house. The reporters of HoaBinh Newspaper haverecorded some pictures of the atmosphere celebrating Independence Day there. 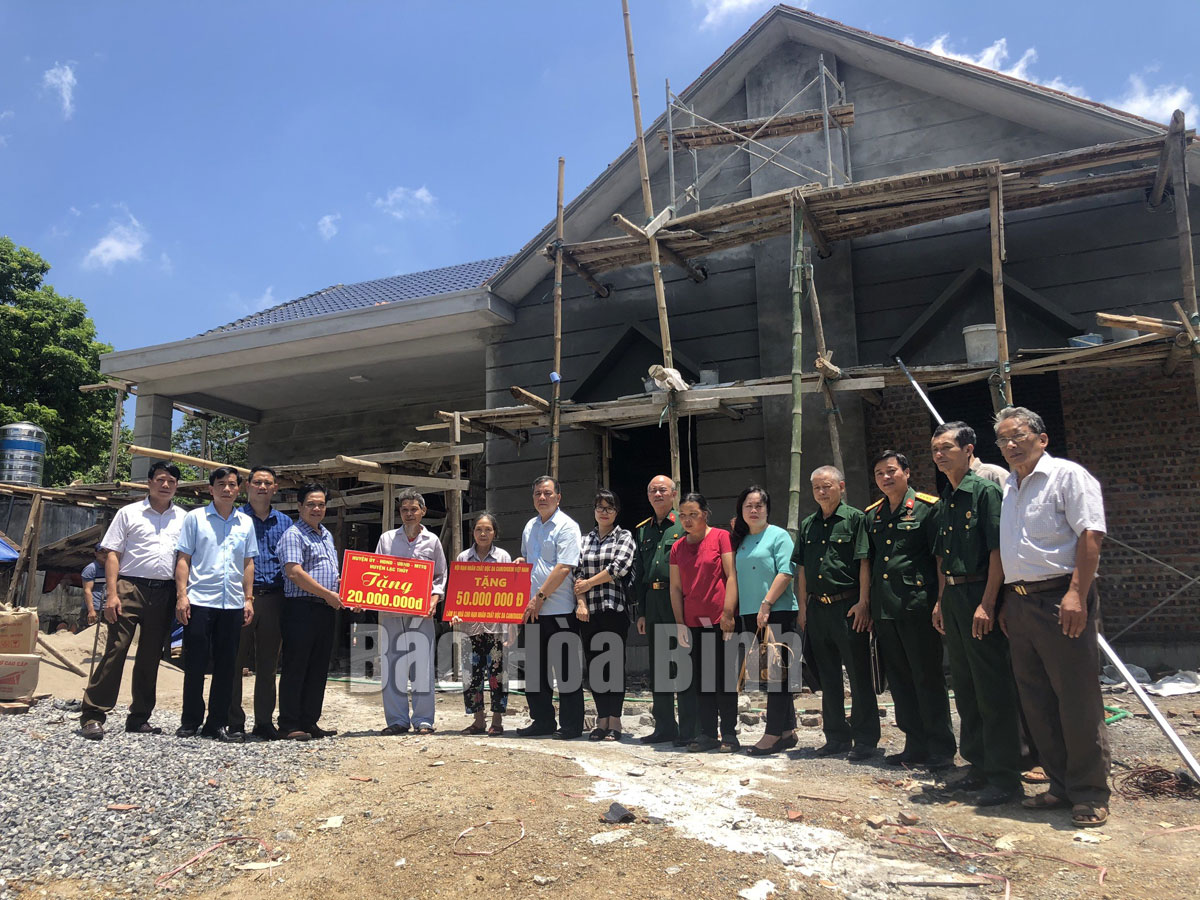 (HBO) - The delegation of the Central Association of Victims of Agent Orange/dioxin in Vietnam led by Senior Lieutenant General, Nguyen Van Rinh, the Chairman of the Central Committee, worked with the province on the implementation of Directive No. 43-CT/TW of the Secretariat on "Strengthening the Party's leadership in dealing with the consequences of toxic chemicals used by the US during the war in Vietnam” on July 8th, 2020.

Admiring the terraced fields in Mien Doi, the highland commune

(HBO) - "It isn’t necesary to go anywhere far, even in the province there are also beautiful terraced fields: The terraced fields are layered as softly as the layered golden silk strips along the hillside, one after another, iridescent in the sun shining brightly.” Yes, going to the highland commune, Mien Doi (Lac Son) in the ripen rice season, you will be satisfied to see this wonderful picture!

(HBO) - With the spirit of "Hoa Binh Youth has been volunteering, creating for the community”, thousands of members of the Communist Youth Union from 10 districts and the participated in response to "The Green Sunday” for the youth memebers focused on supporting the construction of a new countryside, the urban civilization, the social security activities, the prevention and control of Covid-19 epidemics and so on Here are some images of the typical activities in the localities. 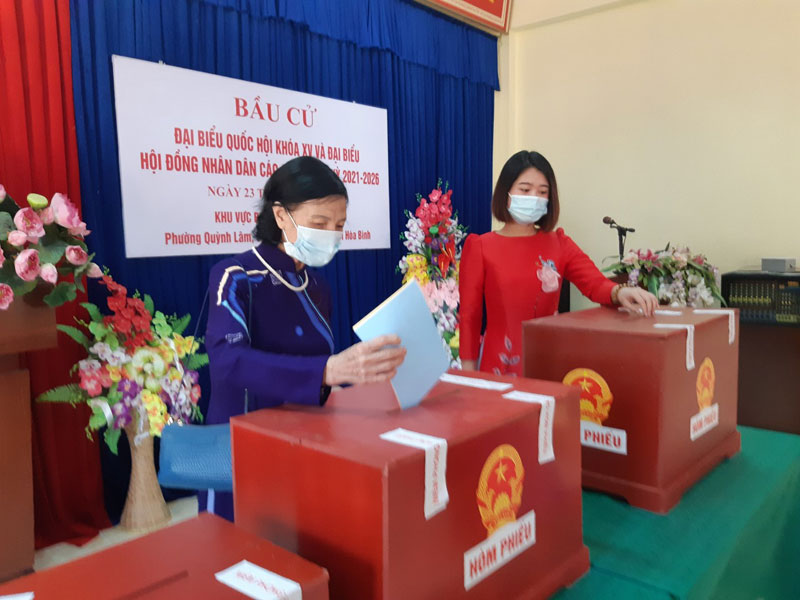 Some photos of the Election Committee in Hoa Binh 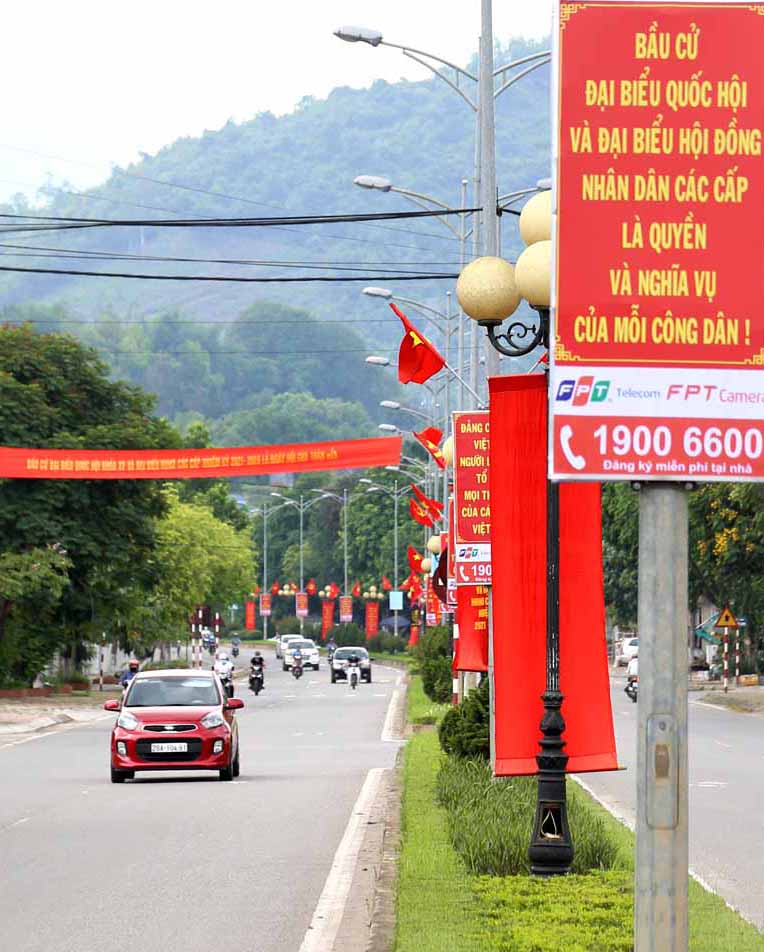 (HBO) - On May 23th, along with the whole country, the voters in our province will eagerly vote, elect congress people for the 15th National Assembly and People's Councils at all levels, term 2021 - 2026. To welcome the important event of our country, all the roads and the residential areas in Hoa Binh city have been filled with colorful flags, banners, slogans, and billboards...