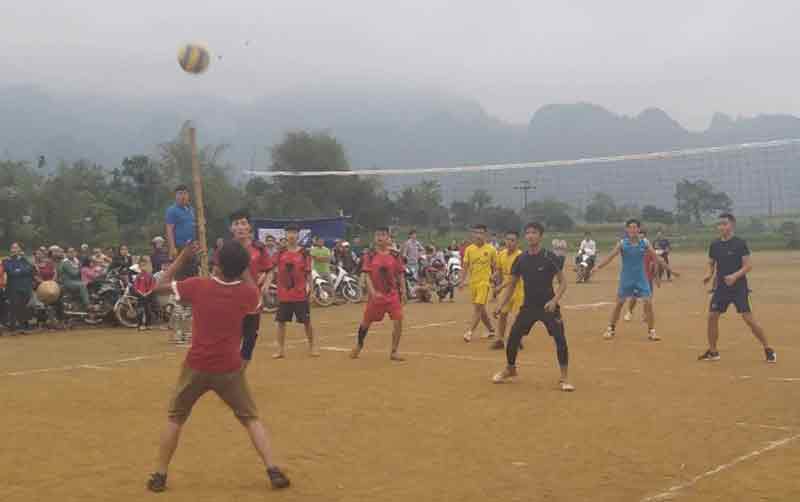 The movement of physical and sports training has been flourishing in the locality, attracting a large number of people to participate and improving the health and spirit of the people. At about 17:00 everyday, the local people gather at the cultural houses of the villages to take part in the practice and competition. All sports are collective, attracting a large number of participants, from the elderly, women to children. The joyful and happy atmosphere of the training sessions seem to dispel the fatigue and the stress after hard working hours.

Currently, there are 9 soft volleyball clubs, 9 clubs of culture and arts, 1 sports dance club, 2 badminton clubs, 1 swimming club in the commune. They regular practice and exchange with each other and with other communes through the friendly competitions. The movement of sports and physical training has strongly been developing and spreading throughout the commune, and it has actively been responded by everyone. In addition, the competitions have been held to select the best players to participate in sports tournaments of the district, making the sports movement more exciting. Over the years, the clubs have made the outstanding achievements in sports tournaments.

Mr. Dinh Truong Son, the officer, who is in charge of culture and sports of the commune says "Through sports and cultural activities, the spiritual life of the people has been improved more and more, bringing the exchange and connecting people. At the same time, it helps raise awareness about the benefits of taking care of the health, staying healthy and practicing sports regularly every day”.

The strong spread of the sport movement has created connection and it has increased the solidarity in the community. In the coming time, the commune will be promoting the cultural and sports activities among the people, making the sports movement in the communes, agencies and schools more and more exciting, contributing to the socio-economic development of the locality.