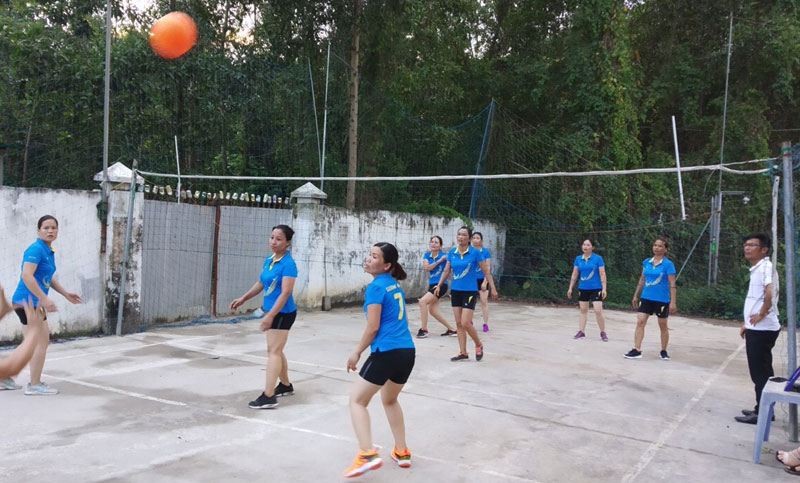 In Cao Duong commune, there are over 30% of the population who regularly practice physical exercises and sports every day. Soft volleyball is a favorite sport of all ages because it is easy to play, it does not require too much technique and physical strength, so it attracts a large number of people. The enthusiastic forces participating in daily practice are the elderly, the young people, and the women.

Over the past time, the commune has paid attention and supported funds to repair the yard and purchase the equipment for training and competing. After merging the communes, in the whole commune there are 26 courts for soft volleyball, in which 10 courts have been equipped with lights. On average, there are 3-4 courtyards in each village or hamlet. In addition, some people take advantage of the vacant land to buy stakes and nets built for practicing every day.

Every year, the commune maintains 3-4 tournaments on the occasions of holidays and New Year, creating a useful playground for the people. At the same time, they have been directing the appropriate departments, unions to coordinate with neighboring communes to organize competitions so that the people can rub and exchange experiences, and to increase the solidarity. The establishment of clubs, groups according to age have been maintained to select the typical athletes to participate in training, representing to compete in tournaments organized by the locality and the district.

Mr. Nguyen Van Khien, the Chairman of the Commune’s People's Committee says: "Due to the influence of Covid-19 epidemics, the commune has not organized any volleyball tournaments since the beginning of the year. However, the commune still encourages the local people to actively practice sports every day to improve their health. However, it is necessary to ensure safety in the prevention and fighting against the epidemics. In order to promote the development of soft volleyball, the commune has strongly been propagandizing so that the people practice soft volleyball regularly and strengthen the exchange and experience and improve the volleyball playing skills. Thereby, the development of soft volleyball has been promoted, contributing to creating a joyful and exciting atmosphere, increasing the solidarity, and effectively implementing the tasks of developing the local social economy.