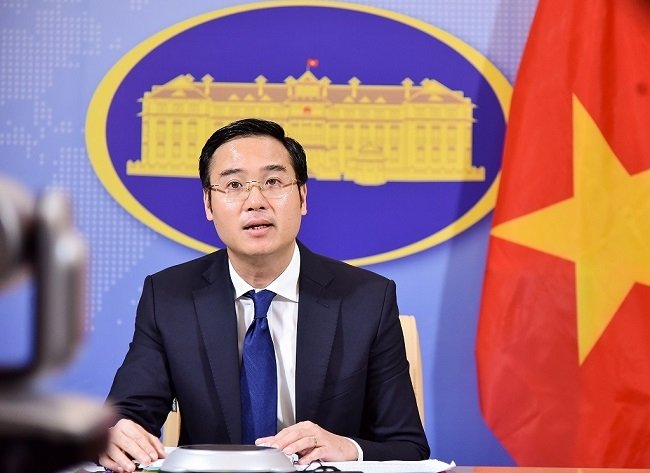 China’s circulation of a number of diplomatic notes at the United Nations (UN) that raise unreasonable sovereignty claims over Vietnam’s Hoang Sa (Paracel) and Truong Sa (Spratly) archipelagos as well as maritime claims in the East Sea runs counter to the provisions of the 1982 UN Convention on the Law of the Sea (UNCLOS), an official said on April 23.

In face of this, Vietnam on March 30 circulated a note at the UN to reject China’s claims as mentioned in many documents sent to the UN and related international agencies, Deputy Spokesperson of the Foreign Ministry Ngo Toan Thang highlighted at the ministry’s regular press briefing in Hanoi, adding that Vietnam has also contacted China to strongly affirm its consistent stance and reject China’s wrongful viewpoint.

The official was answering reporters’ queries about Vietnam’s response to China’s April 17 sending of a note to the UN stating sovereignty claims over the East Sea.

As stated at the press briefing on April 9, Vietnam’s sending of diplomatic notes is a normal act to manifest its stance and to safeguard its legal and legitimate rights and interests, he said.

Vietnam circulated a note on April 10 to affirm its stance on the East Sea issue with other parties concerned.

According to the official, Vietnam has repeatedly affirmed that it has sufficient historical evidence and legal basis to assert its sovereignty over the Hoang Sa and Truong Sa archipelagos in accordance with international law.

As a littoral state, Vietnam is entitled to fully enjoy the waters in the East Sea determined on the basis of the UNCLOS, he said.

"All the maritime claims which are contrary to the provisions of the UNCLOS and infringe upon Vietnam's sovereignty, sovereign right and jurisdiction over its waters are null and void,” he affirmed.

Vietnam believes that all countries have common duties and interests in respecting the fundamental principles of international law, including the principle of national sovereignty equality, restraint from the use or threat to use of force in international relations against the territorial integrity of other countries, promoting friendliness, and settling international disputes through peaceful means, Thang said.

In this spirit, he highlighted, Vietnam stands ready to resolve disputes with parties concerned through negotiations as well as other peaceful measures, including those specified in the UNCLOS.

Regarding China’s issuance of the so-called "standard names” for 80 entities in the East Sea, Thang stated that Vietnam has affirmed many times that it has sufficient historical evidence and legal foundation to assert its sovereignty over the Hoang Sa and Truong Sa archipelagos, in line with international law, and at the same time has national sovereign right and jurisdiction over the waters established in accordance with the UNCLOS.

"All the acts harmful to Vietnam's sovereignty over the Hoang Sa and Truong Sa archipelagos, sovereign right and jurisdiction over its waters are void and unrecognised, and Vietnam resolutely protests such acts,” he affirmed.