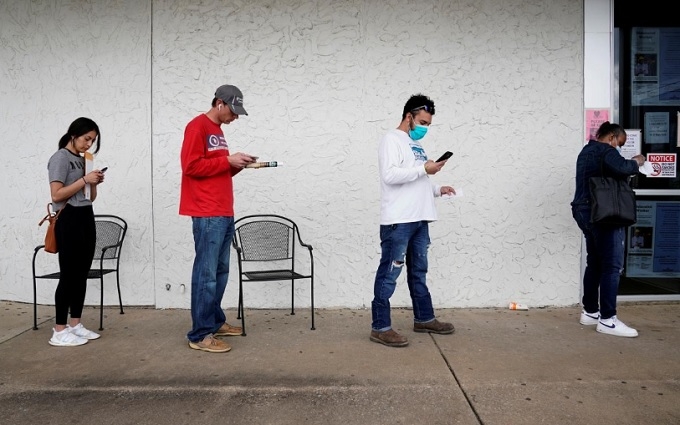 Together with the economic crisis triggered by COVID-19, a wave of unemployment is spreading in many major economies. Countries are now striving to not only fight the disease but also recover economic growth and support disadvantaged people.

FILE PHOTO: People who lost their jobs wait in line to file for unemployment following an outbreak of the coronavirus disease (COVID-19), at an Arkansas Workforce Centre in Fayetteville, Arkansas, US, April 6, 2020. (Reuters)

The International Labour Organisation (ILO) recently warned that the pandemic is seriously affecting employment and manufacturing around the world, especially in the tourism and automobile industries. Alette Van Leur, Director of Sectoral Activities Department at the ILO, emphasised that employment is facing the worst global crisis since World War II.

Given that fact, the negative impact of COVID-19 on the economy has also "blown away” the US government’s achievements in job creation over recent times. Statistics show that, during the booming employment period from September 2010 to February 2020, the US created 22 million additional jobs. However, according to the US Department of Labour, in only the past five weeks, 26.4 million Americans have applied for unemployment benefits. Economic experts at the Western Bank in San Francisco stated that the US economy is suffering a "job bleed” at an unprecedented speed and scale, which could be compared to a "national-scale natural disaster”.

Meanwhile, in France, more than 10 million people working in the private sector have registered themselves on the temporary unemployment list. In an interview with BFM Business, French Labour Minister Muriel Penicaud revealed that the temporary unemployment rate in France is more than 50%. As reported by the British Chamber of Commerce, more than 70% of small and medium-sized enterprises (SMEs) in the UK have given some employees a break due to the pandemic and are waiting for aid from the government, in the context that the UK is currently the sixth largest COVID-19 outbreak in the world, with hundreds of thousands of cases of infection. In Thailand, the University of the Thai Chamber of Commerce predicted a GDP decline of 4% and 10 million jobs lost in the second largest economy in Southeast Asia due to the impact of the pandemic.

With the employment crisis becoming an increasingly serious problem for such economies, governments have been forced to launch bailout packages to ensure social security and help SMEs to avoid bankruptcy. In the US, MPs in the House of Representatives have passed a coronavirus relief bill to fund small businesses and hospitals struggling with economic losses from the pandemic. Accordingly, the bill adds US$310 billion to replenish the Paycheck Protection Program (PPP), including US$60 billion for community banks and small lenders and US$75 billion for hospitals. Earlier, the US Senate passed a US$484 billion aid bill to support small businesses and hospitals.

In the past few days, governments of European countries such as France, the Czech Republic and Iceland, have implemented emergency measures to increase support for businesses and workers affected by COVID-19. The Czech government announced that it would spend CZK216 billion to provide direct support, including tax reduction for enterprises and an aid programme for workers, while the majority of the remaining amount would come in the form of loan security. The total value of this support package is equivalent to 20.7% of the country’s annual GDP. In Germany, the Federal Employment Agency has permitted the deployment and creation of conditions for asylum seekers and jobless nationals from a third country to participate in crop harvesting in the agricultural sector.

What is causing "headaches” for leaders in the world is that the attempt to restart the economy and enable people to resume working is a "double-edged sword”, as the disease remains severe in many countries. The ILO recommends that workers should only return to work when they meet the necessary conditions to prevent a recurrence of the disease. Meanwhile, many countries’ economic support packages are limited and the epidemic shows no sign of ending. These facts are putting the world in a positon of unprecedented difficulty.