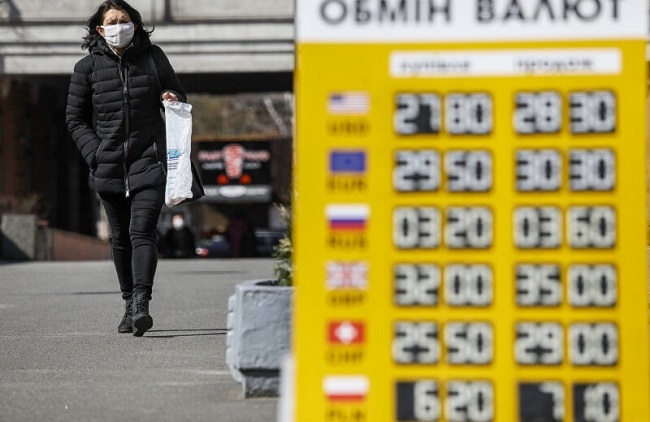 A woman wears a face mask amid concerns over the spread of the COVID-19 coronavirus. She passes by a currency exchange on March 25, 2020, in Kyiv showing the hryvnia weakening against the USD. (File photo: Kyiv Post)

Ukraine will receive an immediate disbursement of about US$2.1 billion from the 18-month Stand-By Arrangement, the IMF said in a statement.

"That's $200 mln more than originally planned," Ukrainian President Volodymyr Zelenskiy said on his official Twitter account. "The new program funding will help us to overcome the challenges caused by #COVID19. The #IMF has proven itself to be a reliable partner to a friend in need."

The rest of the funds will be spread over four reviews during the program, which focuses more on stability than deep structural reforms, IMF Managing Director Kristalina Georgieva said in a statement.

Zelenskiy's government has trumpeted the agreement as a vote of confidence in its ability to deliver reforms, including a banking law that went against the interests of one of the country's wealthiest tycoons.

One of Europe's poorest countries, Ukraine does not have the financial firepower for major stimulus measures to keep its economy afloat after imposing a nationwide lockdown in March that has shuttered or restricted many businesses.

Securing the IMF funds also is expected to unlock financing from the European Union and other institutions.

Ukraine's economy is seen contracting around 5% this year, including a 12% second-quarter drop.

The country has recorded 27,856 confirmed coronavirus cases, with 810 deaths, although the lockdown is gradually being lifted.

To secure the IMF deal, Ukraine had to pass legislation that prevents the former owners of insolvent banks from regaining their assets. The move was viewed as aimed against the interests of Ihor Kolomoisky, who formerly owned the country's largest lender, PrivatBank - nationalized in 2016 - and who has waged a legal battle to regain control or receive government compensation.