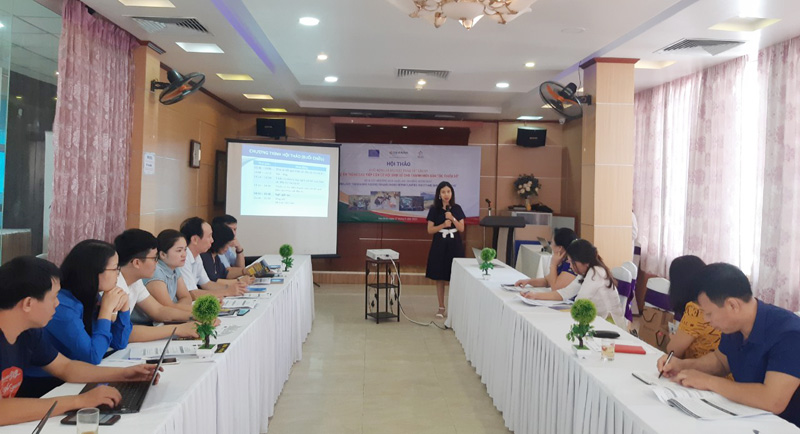 The scene of the kick-off ceremony of the project "Increasing the access to the options of livelihood for the youth of the ethnic minorities.”

The project funded 711,224 EUR by the European Union for 42 months (2020-2023) in 2 provinces, Hoa Binh and Lao Cai. In which, the project supported Hoa Binh province with 4.7 billion VND and will be implemented in Mai Chau and Da Bac districts.

The project's goal is to increase the access to the access to the options of livelihood for the youth of the ethnic minorities through promoting career development and startup initiatives. Specifically, it provides the opportunities for career development and startup initiatives for the ethnic minority youth aged 16-30 in 2 upland districts of the province. They have cooperated with the provincial Department of Education and Training to develop and transfer the vocational training textbooks for high school students. They have also cooperated with the Department of Labor, War Invalids and Social Affairs to develop the vocational training curricula based on the market demand for the youth apprenticeship in the province.

The project will implement the following activities: The assessment based on the market to identify the career and job opportunities, the website construction, the startup guide for the young people, launching the career guidance, vocational training, startup initiatives, providing on-the-job internships and vocational training opportunities for the young people, organizing the job fairs connecting the ethnic minority youth with the job opportunities, organizing a contest " The Challenge Initiative” to select startup initiatives and support the excellent startup ideas ...

The project is aimed at high school students and the ethnic minority youth, helping to equip the knowledge and career skills according to the market needs to orient the jobs or careers they pursue. The project has been designed with the capacity of the partners at all levels, creating conditions for them to support the young ethnic minorities the access to the options of livelihood for the youth of the ethnic minorities to implementing the startup initiatives.