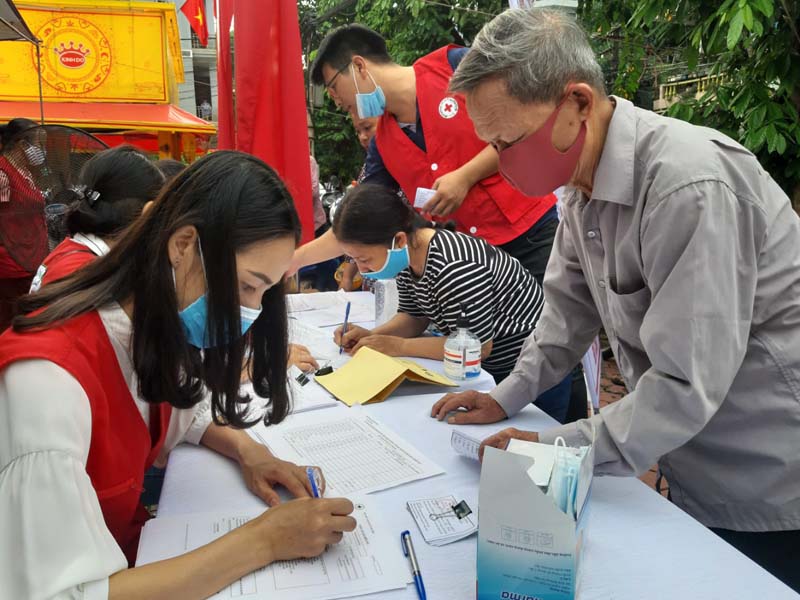 The Provincial Red Cross has organized "The Humanitarian Market” in response to the Action Month for the victim of Agent Orange in 2020 in Hoa Binh city and are giving gifts to the families in difficult circumstances in the area with a total value of over 100 million VND.

The awareness of Party committees at all levels towards the Red Cross and the humanitarian work has had a positive change. The state management over humanitarian activities has been strengthened. The Red Cross’ network has been strengthened and developed, and it has been operating increasingly effectively. Currently, in the whole province there are 10 Red Cross associations at the district’s level, 206 communal associations, a number of agencies and schools with over 43,000 members, over 61,000 volunteers, 382 youth shock teams with more than 5,100 members supporting the activities of the Red Cross at all levels. The humanitarian activities have been increasingly developed, contributing to implementing the social policies, taking better care of the lives of the poor people in areas hit by the natural disasters, and other social security activities.

The different levels of the Red Cross have actively renewed the content and modes of operation, towards practicality, efficiency, strong grassroots and being consistent with the characteristics of the province. In particular, they have actively coordinated with other departments, agencies, unions and organizations to implement the programs, the projects and the campaigns associated with the implementation of Directive No. 05-CT/TW. In particular, they have effectively deployed the following campaigns and movements "Each organization and individual associates with a humanitarian address”, "Tet for the poor and the victims of Agent Orange victims”, "Blood donation volunteering”, "the Bank of Cows” and so on. The spirit of mutual love, "the good leaves protect the tattered ones” has been strongly spreading, practically sharing difficulties and tribulations with the people in need, affirming defining the humanistic and good nature of Vietnamese people.

Over the past 10 years, the total value of the activities of the provincial Red Cross has reached 155.9 billion VND, and over 491 thousand people in difficult circumstances have been supported. In particular, all levels of the Red Cross have mobilized organizations, individuals, businesses and philanthropists to raise 913 million VND to prevent and fight Covid-19 epidemics. Since 2010, more than 209 blood donations have been held, over 93,700 turns of blood donors have been mobilized, and more than 51,600 units of blood have been received. Eight clubs of voluntary blood donation with 250 members have been maintained.

The Red Cross has proactively coordinated with the appropriate departments, agencies and organizations to well organize the activities of disaster prevention and response. They have timely provided relief, help and care for the poor and the people in affected areas of the natural disasters, epidemics, the disadvantaged people in difficult circumstances. They have provided emergency relief for over 108,000 people affected by the natural disasters, with over 256 tons of rice, 15,200 barrels of instant noodles ... and many other objects worth over 8.3 billion VND.