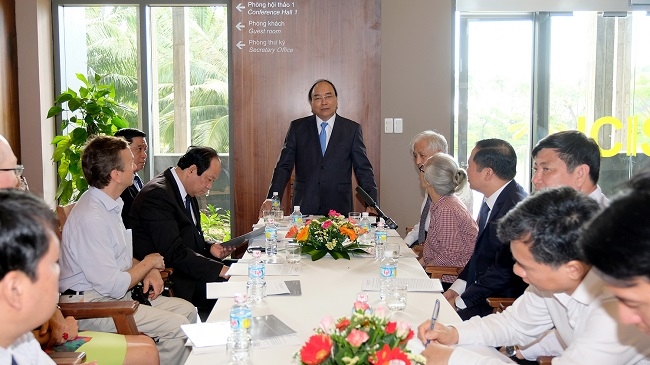 Prime Minister Nguyen Xuan Phuc has agreed in principle a plan to build the south central province of Binh Dinh into a scientific and educational urban area when visiting the International Centre for Interdisciplinary Science and Education (ICISE) on May 6.

This is a brave and pioneering step which helps to gather renowned scientists around the world, thus contributing to promoting the nation’s science, PM Phuc told ICISE scientists.

He stressed the importance of science and technology, including basic and applied sciences, in the country’s development.

The Government leader spoke highly of the achievements of the ICISE, particularly in holding major international scientific events.

In the context that the fourth Industrial Revolution is posing both opportunities and challenges to Vietnam, ICISE should grow more sustainably and effectively in order to foster the country’s basic science researches and improve its human resources.

Emphasising the importance of applying scientific achievements in economic development, PM Phuc said he hopes the centre will work to speed up the application of science technology in the reality.

He also requested the centre to create a better environment to attract more scientists, and connect more closely with universities and fundamental science centres, both inside and outside the country.

The leader required the Ministry of Science and Technology, the Vietnam Academy of Sciences, and Binh Dinh province to create favourable conditions to bring into full play the intelligence of ICISE scientists.

ICISE was founded by Prof. Jean Tran Thanh Van and his wife, Prof. Le Kim Ngoc, in 2013. Since then, the centre has held 40 international symposiums, with the participation of over 3,500 scientists, including 12 Nobel winners.