Vietnam always attach importance to strengthening and enhancing the traditional friendship and sound cooperation with Cambodia for benefits of both nations, as well as regional and global peace, stability, cooperation and development, General Secretary of the Communist Party of Vietnam and President Nguyen Phu Trong has said. 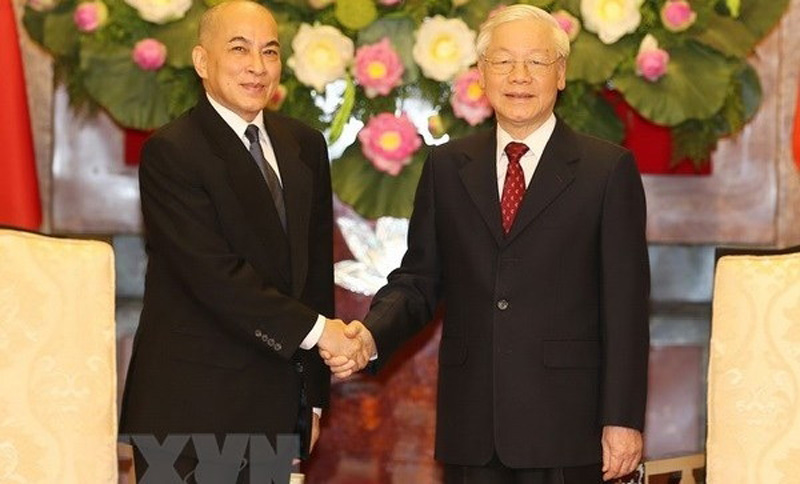 Meeting with Cambodian King Norodom Sihamoni in Hanoi on December 19, the Vietnamese leader congratulated the Cambodian people on the achievements they have made under the judicious reign of King Sihamoni and the leadership of the Senate, National Assembly and Government.

He recalled the traditional solidarity, mutual support and assistance between the two nations as well as the valuable support and help that late King Norodom Sihanouk and the Cambodian people gave Vietnam during its struggle for national independence and reunification.

The Vietnamese leader expressed his delighted at meeting again King Sihamoni, a close friend of the Vietnamese people, stressing that the King’s ongoing leisure tour showed his special sentiments to Vietnam.

On the occasion, he extended his best wishes to Queen Mother Monineath Sihanouk, and invited the King and Queen Mother to make a state visit or a leisure tour to Vietnam at a convenient time.

King Sihamoni, for his part, noted with pleasure the continuous development of Vietnam-Cambodia ties in the past five decades, adding that the two countries have enjoyed good cooperation in all spheres as well as at regional and international forums, including the Association of Southeast Asian Nations (ASEAN).

Describing Vietnam as a great friend and a close neighbour of the Cambodian people, the King affirmed that he will continue efforts to consolidate the solidarity, friendship and sustainable cooperation between the two nations.

The Cambodian people appreciate and will never forget the great and valuable support and assistance that the Vietnamese Party, State and people have reserved for them in all circumstances, he said.