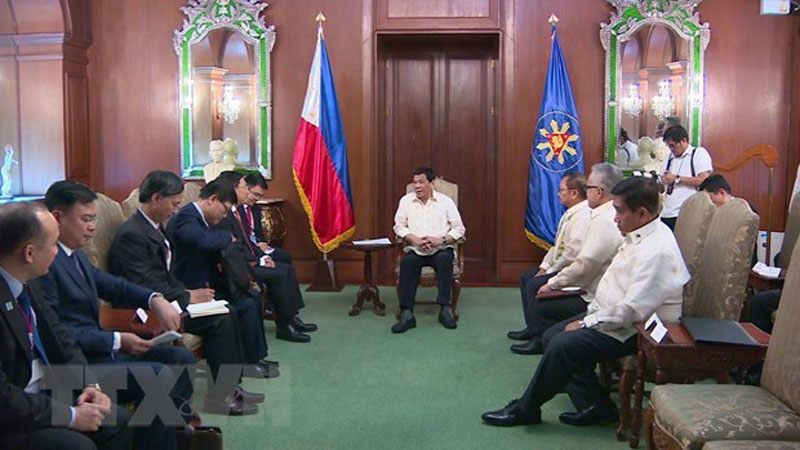 Vietnamese Deputy Prime Minister and Foreign Minister Pham Binh Minh and Philippine Foreign Secretary Teodoro Lopez Locsin co-chaired the ninth meeting of the Vietnam-Philippines joint Commission for Bilateral Cooperation in Manila on March 6.
At the meeting, both Minh and Locsin highlighted the growingly intensive and trustworthy political and diplomatic ties between the two countries, which were reflected by contents and outcomes of visits and meetings at all levels and through Party, State, Government, National Assembly channels and people-to-people exchange.
Both expressed their delight at the enhanced and more practical cooperation in national defence and security via the exchanges as well as sharing of information and experience between the armed forces of the two countries, along with regular defence policy dialogues and naval consultations.
The two sides agreed to step up collaboration in search and rescue operations at sea and the fight against terrorists, pirates and cross-border crimes, especially drug-related crimes.
They consented to take measures to enhance economic cooperation and create optimal conditions for enterprises of the two countries to strengthen investment and business partnerships, aiming to maintain annual two-way trade growth above 20 percent. In 2018, bilateral trade stood at 4.72 billion USD, up 18 percent as compared with the previous year, they noted.
The Vietnamese side affirmed its willingness to be a long-term and stable supplier of rice with competitive prices for the Philippines.
Having acknowledged great potential for tourism cooperation, the two ministers consented to promote measures to encourage Vietnamese and Philippine tourists to visit each other’s country in the time ahead.
They also lauded active progress in maritime and oceanic collaboration as well as cooperation in agriculture, information-communications, environment, education-training, culture, sports and people-to-people exchanges.
Regarding regional and international issues, Locsin congratulated Vietnam and commended the country’s preparations for the second summit between the US and the Democratic People’s Republic of Korea (DPRK) in late February.
They meeting was of great significance to building trust and promoting practical peace talks on the Korean Peninsula, he said, stressing that Vietnam has proven its role and active contributions to regional and international matters.
The two sides also agreed to continue their close coordination at multilateral forums and expressed their resolve to coordinate with other members of the Association of Southeast Asian Nations (ASEAN) to enhance intra-bloc solidarity and the grouping’s central role in regional security and strategic issues.
Vietnam highly evaluated and pledged to continue strongly backing the Philippines’ role as a country coordinator of the ASEAN-China relations until 2021 while the Philippines side affirmed its support for Vietnam’s successful assumption of the ASEAN Chairmanship in 2020.
The two ministers exchanged in-depth views on and shared their common concern over recent developments in the East Sea.
They emphasised the strategic significance of ensuring peace, security and safety of navigation and aviation in the East Sea, settling disputes peacefully, practicing restraint, not complicating the situation, not militarizing, respecting international law and the 1982 United Nations Convention on the Law of the Sea (1982 UNCLOS) as well as legal and diplomatic processes, fully implementing the Declaration on the Conduct of Parties in the East Sea (DOC) and soon reaching a practical and effective Code of Conduct in the East Sea (COC).
At the end of the session, Minh and Locsin signed the minutes of the meeting and an action programme implementing the Vietnam-Philippines strategic partnership for 2019-2024. They are important documents that serve as a foundation for the two sides to continue fostering their cooperative strategic partnership in a more practical and effective manner, including activities marking the fifth anniversary of the strategic partnership in 2020 and the 45th founding anniversary of diplomatic ties in 2021.
Later the same day, Minh met with President Rodrigo Roa Duterte, who emphasized the importance of the Philippines-Vietnam strategic partnership and praised the outcomes of the ninth meeting of the committee, considering this as a leading mechanism to continuously beef up the bilateral cooperation for the sake of people of both countries.
On this occasion, Minh visited and presented the Vietnamese President’s second-class Labour Order to the Vietnamese Embassy in the Philippines in recognition of its outstanding contributions to national construction and defence.
Source: VNA