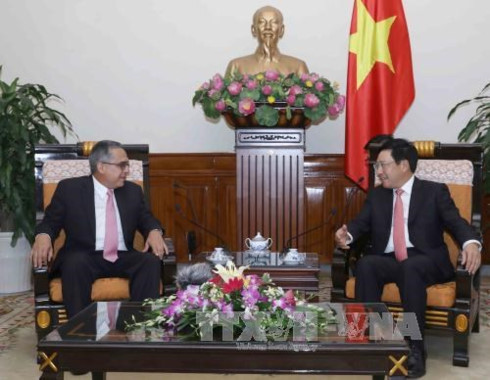 At a reception for Cuban First Deputy Minister of Foreign Affairs Marcelino Medina Gonzalez in Hanoi on September 6, Deputy PM Pham Binh Minh lauded the outcomes of the recent fourth political consultation at the Deputy Foreign Minister level, saying that it contributes to consolidating solidarity between the two nations and two ministries.

Minh praised Cuba for its achievements over the years, reiterating the support the Party, State and people of Vietnam have for the Cuban people.

The two sides should promote cooperation in various areas, such as agriculture, construction material, consumer goods, renewable energy, biotechnology, medicine and pharmacy while supporting each other at international organisations.

He also had separate meetings with Minister of Construction Pham Hong Ha, Co-Chairman of the Vietnam – Cuba Intergovernmental Committee; Deputy Head of the Party Central Committee's Commission for External Relations Tran Dac Loi; and visited the Diplomatic Academy of Vietnam.