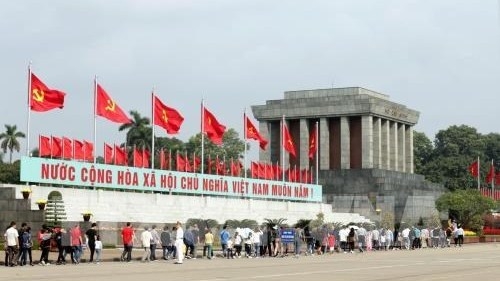 The President Ho Chi Minh Mausoleum welcomed 45,615 visitors, including 4,658 foreigners during the holidays in celebration of the 44th National Reunification Day (April 30) and May Day, according to the mausoleum’s management board.

During the five-day holidays, the management board has coordinated with units in the Ba Dinh Historical-Cultural Relic Complex, and authorised agencies of Hanoi to well serve domestic and foreign visitors.

The Ho Chi Minh Mausoleum is an important landmark of Hanoi capital city and stands integrated to the political and social history of Vietnam.

After his death on September 2, 1969, President Ho Chi Minh was embalmed and put for view in this granite mausoleum. The mausoleum, modelled after Lenin's tomb in Moscow, was built in two years, from 1973 to 1975, with materials donated by people from all over the country.