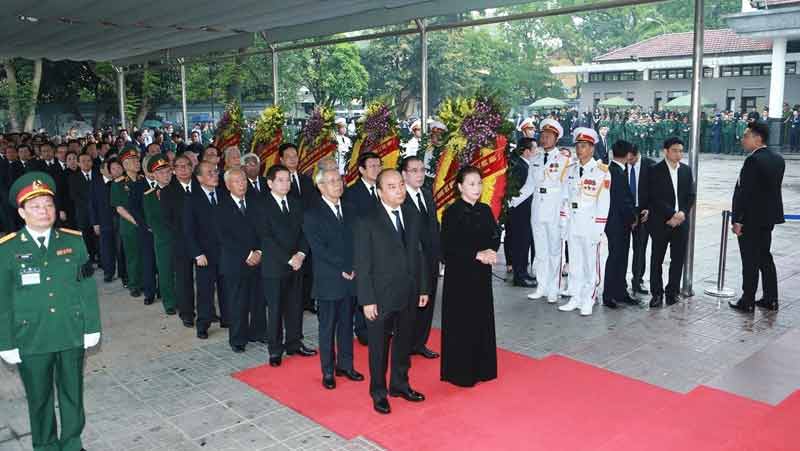 A State funeral was held on May 3 for former President General Le Duc Anh, who was also former Politburo member and former advisor to the Central Committee of the Communist Party of Vietnam (CPV).

Delegates from the Party, National Assembly, State, Government, and Vietnam Fatherland Front (VFF) along with officers and soldiers of the armed forces, Party members, and people from localities nationwide gathered at the National Funeral Hall, No.5 Tran Thanh Tong, Hanoi since early in the morning of May 3 to pay their last respects to the former State leader who devoted his whole life to the national revolutionary cause.

The same time, tribute-paying ceremonies were held at the Thong Nhat (Reunification) Hall in Ho Chi Minh City and the Conference Hall of the People’s Committee of the central province of Thua Thien-Hue, the hometown of former President and General Le Duc Anh.

The memorial ceremony for the late President will start at 10:45 at the National Funeral Hall in Hanoi the same day.

The funeral ceremony will be held at 17:00 the same day at the Ho Chi Minh City Cemetery.
General Le Duc Anh, who served as President of Vietnam from September 1992 to December 1997, passed away on April 22 at the age of 99.
Vietnam has declared two days of national mourning for him on May 3 and 4.
Source: NDO