The Vietnam-China Friendship Association of southern Vinh Long province held its first congress for the 2017-2022 term on September 12, where 17 members of the executive board were elected.

Pham Tu Phuong, Director of the provincial Department of Industry and Trade, was elected as chairman of the association.

The association plans to continue working as a bridge for exchanges in innovations in industry, agriculture, healthcare, and education between Vietnam and China. It will also pave the way for cooperation in trade and economy, science and technology, education, culture, sports and tourism between Vinh Long and partners from China. 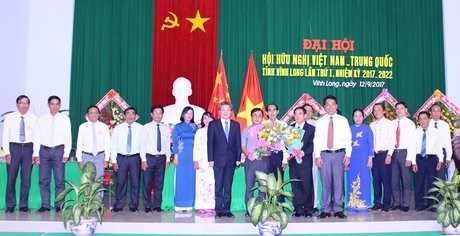 The Vietnam-China Friendship Association of southern Vinh Long province held its first congress for the 2017-2022 term on September 12. Photo: baovinhlong.com.vn

Speaking at the event, Chinese Consul General in HCM City Chen Dehai praised the Vietnam-China friendship, saying it is a valuable asset for both countries. He also lauded the role the Vietnam-China Friendship Association has played in fostering cooperation between the province and Chinese localities.

Vice Chairman of the provincial People’s Committee Lu Quang Ngoi, for his part, asked the association to establish close ties with the Chinese Embassy and Consulate General to work together in implementing its action programs. He urged the association to help local businesses, workers, and students access more opportunities for cultural exchange, education, employment and investment in China.

According to Ngoi, Vinh Long is home to about 5,000 Chinese people, accounting for 0.5 percent of its population.