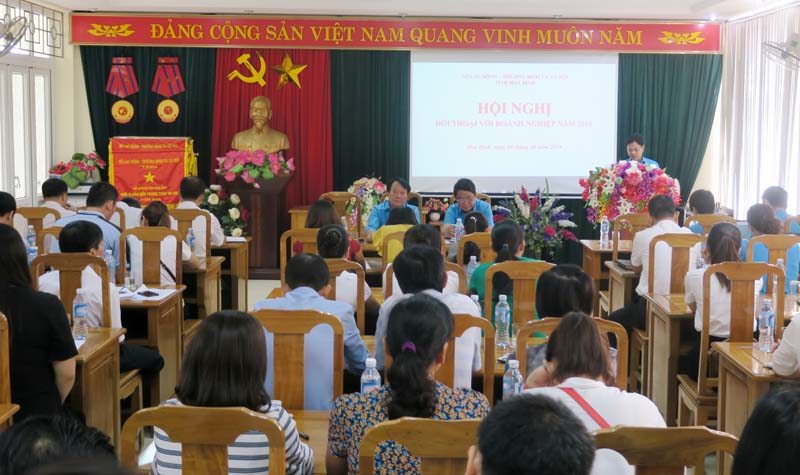 (HBO) - The Department of Labour, Invalids and Social Affairs of Hoa Binh province has organised a dialogue on labour with businesses operating in the locality.

In the first six months of 2019, the number of labour accidents in the locality decreased significantly compared to the same period of 2018. Local enterprises signed labour contracts with employees and strictly implemented legal regulations.

Labour regulations have been built and registered with the State management agencies in line with legal regulations. Enterprises have implemented well regulations of the Labour Law related to sickness and maternity leaves, weekends, public holidays, and New Year festival for employees.

The department proposed State management agencies to pay attention to raising awareness among enterprises on implementing labour laws; regulations related to labour safety and hygiene; and occupational education, improving the quality of education and training activities to meet the demand of enterprises, as well as promoting inspection and the supervision of the implementation of regulations of the Labour Law at enterprises.

Meanwhile, local enterprises were required to work well on the popularization of laws for workers, provide employees with knowledge of labour safety and hygiene, and equip them with all labour protection equipment.

Enterprises were ordered to pay heed to enhancing inspection and supervision of the implementation of regulations of the Labour Law at enterprises.

At the event, representatives from local enterprises and labourers raised many questions related to labour supply and use; salary; health insurance; social insurance; unemployment insurance; licensing and implementing benefits for foreign workers.

They also asked about the role of trade unions in enterprises, and the interaction between State management agencies and enterprises in guiding the implementation of regulations on labour, and inspection and examination of labour safety.