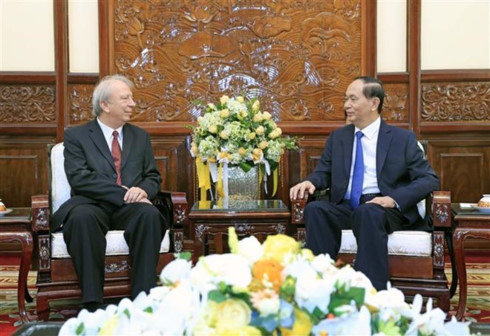 Vietnam is willing to serve as a bridge to support Bulgaria and the EU in enhancing relations with the Association of Southeast Asian Nations (ASEAN) and its member nations.

President Tran Dai Quang made the statement at a reception for outgoing Bulgarian Ambassador to Vietnam Ebgueni Stefanov Stoytchev in Hanoi on September 28.

He recognised the ambassador’s active and effective contributions to promoting the bilateral cooperation in various fields such as politics, external affairs, economy, trade, security, defence and local collaboration along with the two countries’ close coordination at multilateral forums and international organisations.

The President hailed the role and position of Bulgaria in the European Union (EU). As Bulgaria took over the rotational presidency of the EU Council in January 2018, President Quang proposed the country support Vietnam in bolstering partnership with the EU and early reaching the signing and ratification of the EU-Vietnam Free Trade Agreement (EVFTA).

Highlighting the sound traditional friendship and multi-faceted cooperation between Vietnam and Bulgaria, he suggested the two sides maintain all-level delegation exchanges to discuss measures to intensify the bilateral rapports.

He urged the two countries to soon conduct the 24th meeting of the inter-governmental committee on economic, trade and scientific cooperation with the implementation of practical and specific projects with a view to increasing two-way trade in the coming time.

Vietnam and Bulgaria should encourage cooperation among training facilities and increase the number of annual scholarships, he suggested.

He thanked Bulgaria for backing Vietnam’s bid to become a member of the UNESCO Executive Council in the 2015-2019 period and the UN Economic and Social Council (ECOSOC) for 2016-2018, as well as a non-permanent member of the UN Security Council for 2020-2021.

For his part, Ambassador Stoytchev affirmed that Vietnam and Bulgaria are traditional friends and Bulgaria always supports Vietnam at international forums and organisations.

As a member of the EU, Bulgaria will back relations between the EU and Vietnam and believes that the EVFTA will create more economic and trade cooperation opportunities for both sides once ratified, he said.

This year marks the 60th anniversary of President Ho Chi Minh’s visit to Bulgaria, he said, adding that a wide range of activities have been carried out across his country to celebrate this event, including a photo exhibition on the life and revolutionary career of the President.