(HBO) - The military service councils of ten districts and city of Hoa Binh province on February 11 held ceremonies to see off 1,500 new recruits.

Leaders of the province and local departments, organisations, all-level Party Committees and local authorities attended the ceremonies to encourage the new soldiers and their families to fulfill their assigned tasks.

The ceremonies were held solemnly, shortly, and safely. This year, the quality of the new soldiers is ensured in terms of health and political consciousness, and meets requirements.

Hoa Binh city organised the see-off ceremony at 8am on February 11 at the provincial stadium. Member of the Party Central Committee and Secretary of the provincial Party Committee Bui Van Tinh joined officials from local departments, organisations, Party committees and administrations along with the recruits’ relatives at the event. 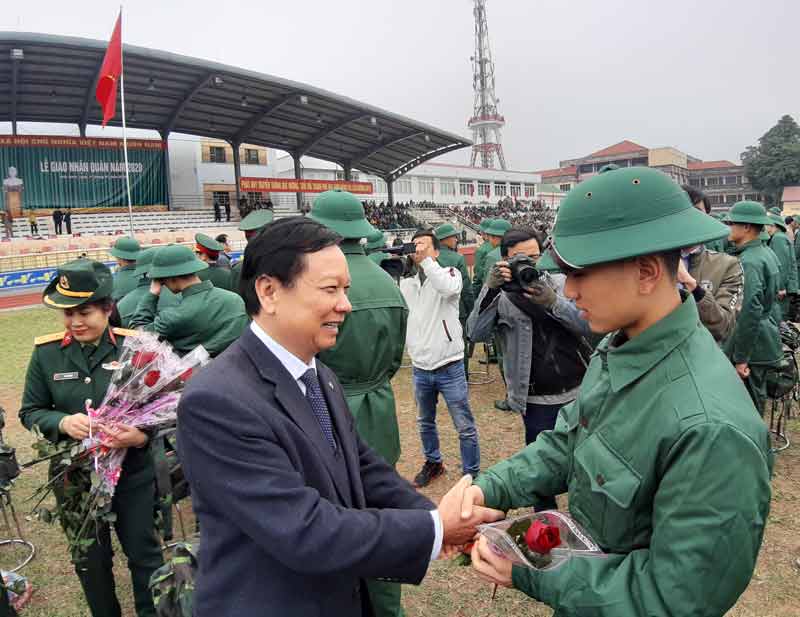 Member of the Party Central Committee and Secretary of the provincial Party Committee Bui Van Tinh encourages the new soldiers.

This year, the city achieved its target of recruiting 155 young people who meet requirements on political virtue and educational level for the military and public security forces. Among them, 24 have attended courses in preparation for joining the Party, and two brothers in a family signed up voluntarily.

Secretary Tinh and other officials presented flowers and encouraged the soldiers to well fulfil their assigned tasks./.