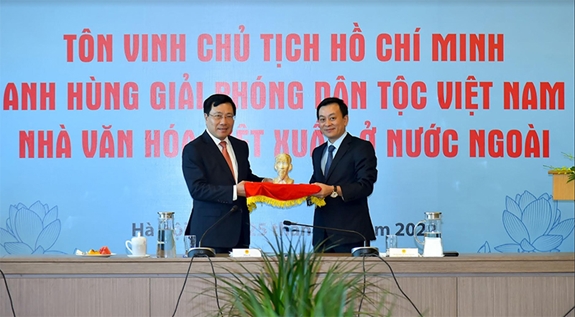 Behind the statute is a very moving story about the affection and trust of loyal communist soldiers in Con Dao Jail in the beloved President Ho Chi Minh.

Sent to Vietnam and work at Con Dao Jail from 1920 to 1952, Mr. Miniconi was in charge of managing prisoners in some camps, and detected that communist soldiers attempted to hide something that was suspected to be weapon. After the check, he collected the statue of President Ho Chi Minh, the leader that communist soldiers loved, respected and admired.

The statute was secret hidden and passed the strict inspection of the French authority to be brought to Con Dao. Witnessing with his own eyes the bravery of the soldiers, Mr. Miniconi decided to keep the statute as his own souvenir of working days in Con Dao.

Returning to France, he respectfully preserved the statute. Before his death, he passed it to his son Paul Miniconi who used to live in his father’s working place - Con Dao.

On December 1st, 2019, Mr. Paul Miniconi, along with the French historian Frank Senateur, were moved to present the statue of President Ho Chi Minh to the Vietnamese Ambassador to the Republic of France, Nguyen Thiep, so that he could transfer it to the Ho Chi Minh Museum for preservation and promotion.

Interestingly, Ambassador Nguyen Thiep, was the son of a communist prisoner who was imprisoned at Con Dao prison during Paul Antoine Miniconi’s time as bishop here. For Mr. Paul Miniconi, returning the statue to the Government and people of Vietnam is to fulfill the sacred will of the beloved father before his death.

Director of the Ho Chi Minh Museum Vu Manh Ha affirmed that this is a precious statue with many historical values, treasured by the family of Mr. Paul Atoine Miniconi for many years. "With all responsibility, love and respect for the Party and Uncle Ho, the Ho Chi Minh Museum will preserve and well promote the value of the statue by exhibiting it in 2020 - the year marking the 130th birthday of President Ho Chi Minh,"he stressed.

Con Dao Prison Relic Site is one of Vietnam's special historical relics. During 113 years (1862-1975), the French colonialist and the American imperialist turned this place into a "hell on earth”, where they imprisoned and tortured hundreds of thousands of revolutionary soldiers and patriots of Vietnam of many generations. However, the prison witnessed revolutionary soldiers’ resilient spirit. The source of the incomparable trust and power was rooted from the revolutionary and sentimental ideals and affection for the beloved President Ho Chi Minh and the Communist Party of Vietnam.

In the prison, the image of President Ho Chi Minh was always a great source of encouragement for the revolutionary soldiers in fighting to maintain the spirit of the communists. In order to have a picture of him to use at flag salute or admission of Party members ceremonies, the prisoners in Con Dao drew and embroidered the image of President Ho Chi Minh according to their imagination and found all ways to store them under strict inspection of the enemy.

They considered them invaluable assets, because the most beautiful image in their minds is the beloved Fatherland, the Party and President Ho Chi Minh./.