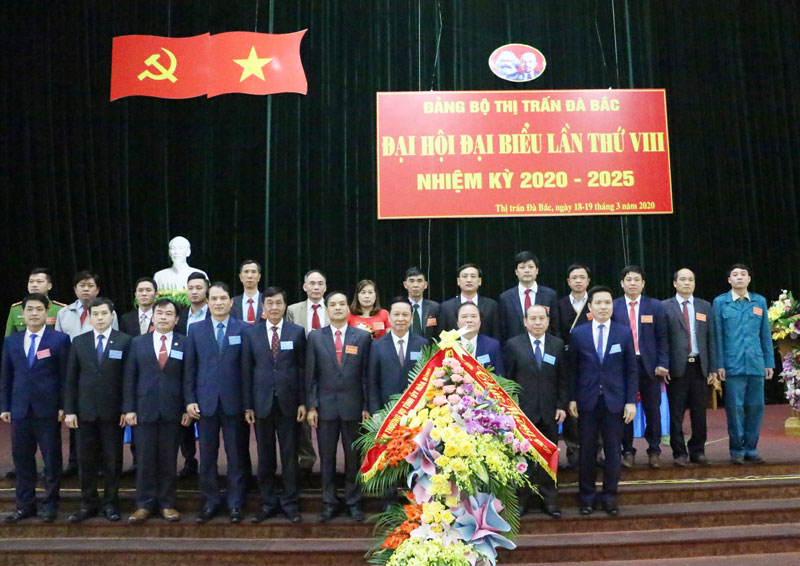 In the past tenure, Da Bac town’s Party organisation has paid attention to Party building, and tried its best to fulfill political tasks. Up to 25 out of the 26 criteria set in the Party congress’s resolution have been reached and surpassed targets. The remaining is the proportion of annual exported labourers. The economic structure shifted in a right direction, with the proportion of trade and services hitting 72.4 percent, industry and construction 15.3 percent; and agro-forestry-fishery 12.3 percent. Per capita income reached 39 millionVND and the poverty rate was reduced to 8.14 percent.

Attention was paid to infrastructure, well meeting production demand and people’s daily life. The fields of socio-culture, health and education have changed positively. The leadership and combative strength of the Party organisation and members improved gradually, thus meeting requirements. The role of the Fatherland Front and socio-political organisations in building the great unity has been promoted, contributing to the successful implementation of the task of building the Party and people's administration.

In the 2020-2025 tenure, the Party organisation of Da Bac town sets the goals of continuing to improve the leadership and combative strength of the Party organisation; promoting the strength of national unity; mobilising all resources for fast and sustainable socio-economic development; improving locals’ material and spiritual lives; preserving and promoting cultural identities of ethnic groups; raising the quality of education and training; effectively implementing the national target programme on sustainable poverty reduction and civilised urban building; and ensuring national defence and security and order.

Delegates cast votes to elect the Executive Board of Da Bac town’s Party organisation for the 2020-2025tenure.

With the spirit of solidarity, democracy and responsibility, the congress elected a 15-member Executive Board and delegates to Da Bac district’s 25th Party Congress for the 2020 – 2025 tenure.

At the congress, Secretary Tinh and other delegates presented flowers congratulating the success of Da Bac town’s 8th Party Congress./.