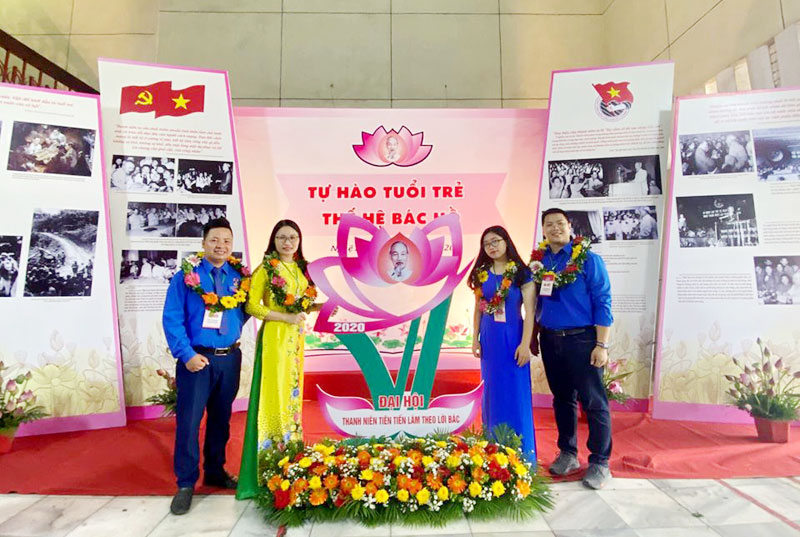 They include the initiative of establishing the club model of the live blood bank of Hoa Binh province, the initiative of establishing the model of Hoa Binh Youth Club for the community and the model of "Enhancing the role of assault and volunteer of young people in the medical field”. Ngoc Anh says "Attending the conference, witnessing hundreds of people with many true shared stories have motivated me to live more responsibly, try and contribute more”.

It is the first time for Dinh Ngu The Ton, the Deputy Secretary of the Youth Union of Tan Vinh Commune (Luong Son) to be honorably and proudly the official representative of the National Congress of Advanced Young people. Implementing "Studying and following the ideology, morality and style of Ho Chi Minh”, Dinh Ngu The Ton has advised and helped the communal Executive Committee of Youth Union to carry out many meaningful youth projects and works highly appreciated by the Party Committee, the Government, and the People. In 2019, participating in the second youth contest of creative startup idea of Hoa Binh province's, he won the first prize with the model "4K Experience Travel in the Happy Farm”.

Currently, the model is implemented with a total area of 10 hectares, of which, he has invested 1,500 m2 of the net houses with the dripping irrigation system, the rain spraying, with the clean agricultural products such as cucumbers, cantaloups, tomatoes ... Basella alba, Ipomoea aquatica, Luffa aegyptiaca,Brassica juncea, Brassica integrifolia are grown in the area outside the net houses... There are 28 member households working in this model with the total income of more than 200 million VND a month.

For the student Hoang Thao Uyen, the member of the Executive Committee of the Youth Union of Hoang Van Thu High School, it was full of emotion when she attended the conference in Uncle Ho's hometown. This is a memory and it is also an important milestone to help Uyen to understand more about Uncle Ho and his career, spreading learning and following Uncle Ho's example to her friends through the activities following his teaching: "Young people are always ready in need” ... For Dr. Nguyen Hoang Ha from the Provincial General Hospital, the feeling and determination more than ever is to continue learning to improve the professionalism, the responsibility and the medical ethics to devote more to the provincial health sector.