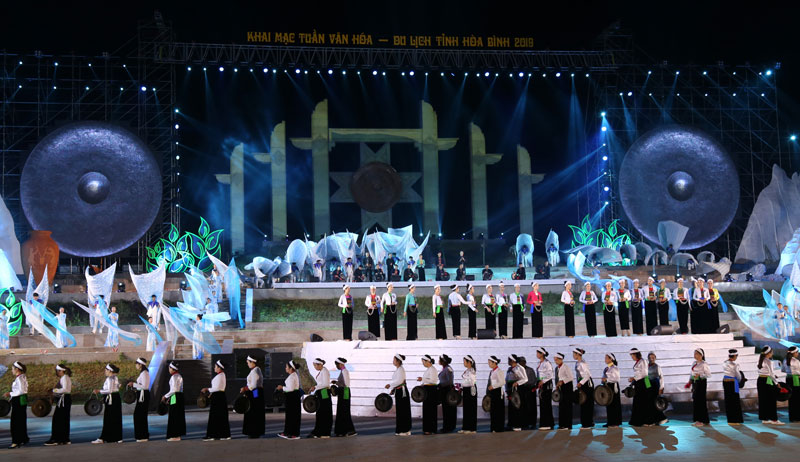 (HBO) - In 2020, the impact of Covid-19 pandemic along with complicated weather changes due to the impact of the climate change with droughts at the beginning of the year, floods at the end of the year, African swine fever which has not been completely controlled has significantly affected the socio-economic development of our province. However, with the fierce participation of Party committees, the appropriate authorities, branches, the business community and the People, our province continued to have positive changes, achieving quite comprehensive results. Hoa Binh Newspaper would like to vote for 10 outstanding achievements and results of the province in 2020.

1. Having completed the arrangement of administrative units at the levels of districts and communes according to Resolution No. 37-NQ/TW of the Politburo and Resolution No. 830 / NQ-UBTVQH14 of the National Assembly Standing Committee on the arrangement of administrative units at levels of districts and communes in Hoa Binh province. At the same time, the Party Congress at all levels and the 17th Provincial Party Congress, the term 2020 - 2025 have successfully been organized according to the set schedule and plan; the XVII Provincial Party Committee's Executive Committee comprising 52 comrades have been elected and 19 official delegates and 1 alternate delegate attending the XIII National Congress of the Communist Party have been elected. The 5th Provincial National patriotic emulation congress in the period 2020-2025. The establishment of the Party Committee of Hoa Binh City on the basis of unifying the Party Committee of Ky Son district and the Party Committee of Hoa Binh city has been decided and announced.

2. Agriculture and rural areas have had positive development. Production value of agriculture, forestry and fishery was estimated to increase by 4.66% over the same period last year, of which the crop production increased by 5.52%, the husbandry went up by 3.54%, and the forestry rose by 3.54% and the fisheries increased by 3.86%. There are 5 more communes finishing the destination, bringing the total number of communes to the destination of the new rural areas up to 58 communes (equal to 44.27% of the total number of communes), an average each commune has reached 15.31 criteria, leading the Northwest provinces in building new rural areas. There are 44 more OCOP certified products, bringing the total number of products meeting OCOP standards at provincial level to 71.

4. The development of urban and technical infrastructure have been promoted, well implementing the program of the urban development of Hoa Binh province, by the end of 2020 the urbanization rate has been estimated at 28.69%. The management of construction investment and quality control of traffic works has been focused. The state management on land, natural resources and the environment continued to be paid attention to. The problems in the work of compensation and land clearance support for key projects have been solved. The Project of Canh Tang lake, the improvement of Road 433, Road 435, the Road connecting Road 12B with Ho Chi Minh Road, the Industrial Zone on the left bank of Da River have also been solved

5. The administrative reform and the improvement in the investment environment have made progress. The issuance of business registration certificates has been accelerated within a day (for valid documents as prescribed), and no more than 2 days for the complicated cases. Deploying the online business registration and returning results through service units have met the public service standards at level 4. The bidding packages under 10 billion VND have been done 100% online, especially a number of bidding packages valued at over 10 billion VND have been implemented online. The province was ranked the third in the country for online bidding. The application of information technology has been focused, deploying synchronously, platforming for sharing, integrating and sharing information and data of the province.

6. The social security has been ensured, the social welfare and people's life have improved. The province's per capita GRDP is 64.5 million dongs, which is higher than that in the Northern Midlands and Mountains. The supportive policies for employees, individual business households, employers and businesses affected by Covid-19 have been well implemented. The policy for people with meritorious services and poor households have fully and promptly implemented. The rate of the poor households in the whole province decreased from 11.36% in 2019 to 8.6% in 2020, a decrease of 2.76%.

7. Closely monitoring infectious diseases causing epidemics, especially effectively implementing the "dual goal” in preventing and controlling Covid-19 pandemic, both developing social economy and ensuring health safety. The positive cases for Covid-19 in the province all passed through the country and immediately quarantined, preventing epidemics from spreading in the community. For the particularly dangerous infectious diseases such as: Influenza A (H7N9, H5N1 ...), cholera, there are no cases of disease recorded in the whole province; and there is no sudden increase in other common infectious.

8. The quality of education at all levels is increasingly practical and sustainable.The network of schools and classrooms has been reviewed and arranged. During the year, the schools at different levels have been merged, reducing 50 schools compared to that of the previous school year. The education in remote, isolated and disadvantaged areas of ethnic minorities has been prioritized. The investment in upgrading material foundations and teaching equipment has been paid attention to. Up to now, the number of schools meeting the national standards is 284, accounting for 54.1%.

9. Completing the construction of the Muong scripts, the set of teaching and learning Muong language, serving the conservation and promotion of Muong ethnic culture in the province. Three sets Muong scripts have issued to departments, branches, localities and units (Guiding to teaching Muong spoken language, writing Muong phonetic script, Unikey Muong percussion code; Learning materials guiding to learn Muong script, reading and understanding Muong language; Document in Muong language ...) and the scientific products of the topic of Compilation of Vietnamese - Muong, Muong - Vietnamese Comprehensive Dictionary have been tested and accepted...

10. The political security, the social safety and the order have been stable. The criminals of social order have decreased, the social evils have been restrained, and the rate of investigation and judgment discovery is high.