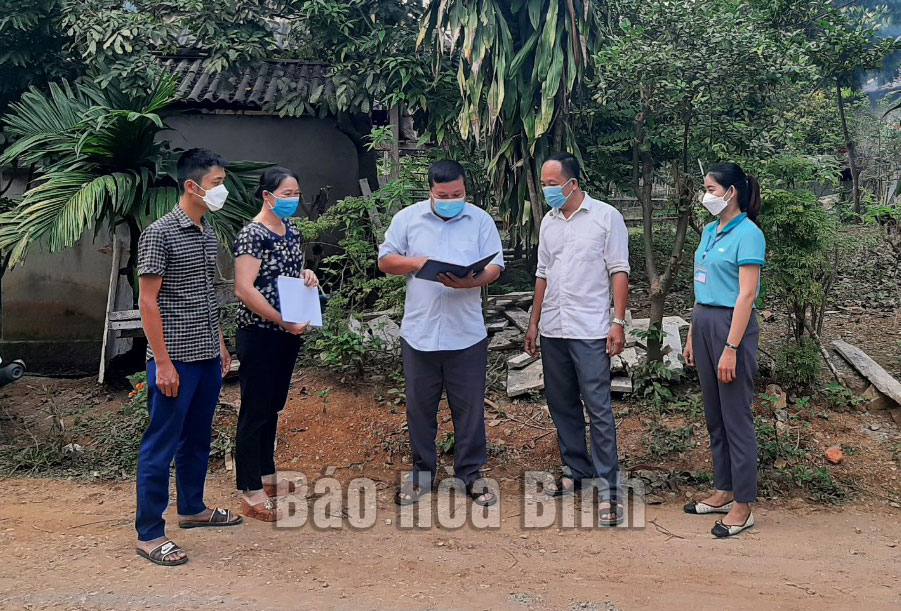 Officials and Party members of Van Mai (Mai Chau) conduct communication activities to popularise the Party resolution to local residents.
Major achievements recorded in the implementation of the resolution of the communal Party Congress in the 2015-2020 tenure included 100 percent of Party cells completing assigned tasks; 90 percent of Party members fulfilling their duties; and the Vietnam Fatherland Front Committee and sectors and organisations showing good performance.
Total production value of the commune as of the end of 2020 reached 101 billion VND, with the agricultural production value hitting 26.7 billion VND, industrial and handicraft production 31 billion VND, and service revenue 43.3 billion VND. Per capita income of locals reached 32 million VND per year, and the ratio of poor households was reduced to 3 percent. State budget collection exceeded the assigned targets.
Ha Thi Vien, Secretary of the communal Party Committee said that right at the beginning of the 2020-2025 tenure, the Party Committee and People’s Committee of Van Mai have applied measures to implement the Party Congress's resolution, striving to complete all the set targets, including 38 million VND in annual per capita income in 2025, a 1 percent reduction of poor household ratio per year, and at least 98 percent of local residents joining health insurance.
To this end, the Party organisation of the commune has directed local residents to focus on boosting economic development, upgrading their mixed gardens, switching the cultivation structure, and adopting economic models with high efficiency that bring about stable incomes.
In particular, the commune encourages the adoption of the model of raising "dam xanh” (Bangana lemassoni) fish and breeding cow , aiming to make "dam xanh” fish an OCOP product and a typical agricultural product of the locality’s strength, she said.
Vien said that investment is encouraged in construction material, garment and textile, mechanical and home appliances production facilities that generate jobs for local labourers as well as service, trade and tourism establishments.
At the same time, the contents of the resolution and relevant documents have been popularised at meetings in villages, thus promoting democracy to increase the efficiency of communications work to bring the resolution into life.
Meanwhile, Ha Cong Minh, Secretary of the Cum village's Party Committee, said that as part of efforts to popularise the resolution, the Party cell of the village has convened meetings to brief members and locals on the contents of the document. After careful discussions, solutions to realise set targets have been mapped out based on the conditions of the locality, while locals’ ideas have been gathered to ensure highest efficiency of the work, he said.
The commune has continued to invest in developing infrastructure system and road system to support socio-economic development. Since the beginning of the 2020-2025 tenure, the commune has directed the implementation of projects to repair and pave inter-village and roads, while mobilising locals’ working days to gather rubbish and repair public works.
With the determination and engagement of the whole political system as well as the consensus of local residents, a vibrant atmosphere has been created in the commune, encouraging the entire community to engage in the implementation of the socio-economic targets given in the communal Party Congress’ resolution.