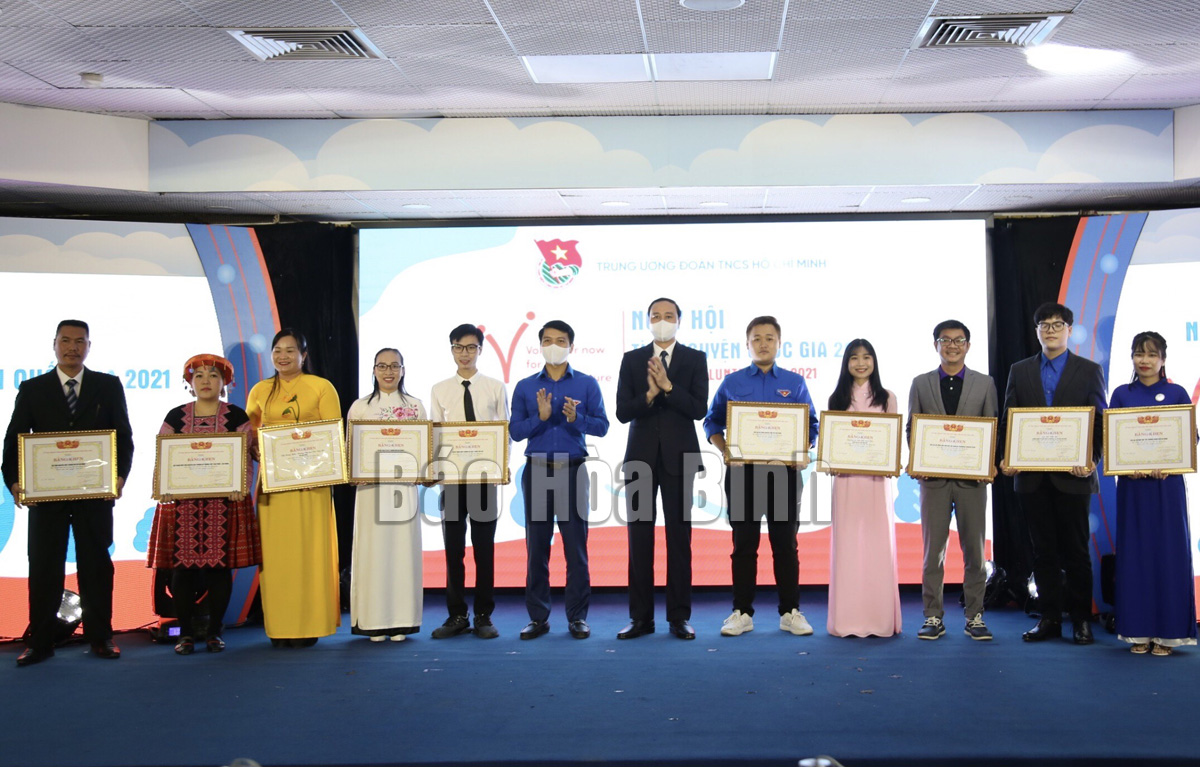 (HBO) - On the occasion of the International Volunteer Day in 2021 (December 5, 2021), in Hanoi, Hoa Binh Volunteer Club belonging to the Red Cross of Hoa Binh City is honored to be the only collective of the province and 1 in the 50 collectives nationwide awarded a certificate of merit by Vietnam Youth Federation for the outstanding achievements in implementing the youth volunteer movement in 2021.

The representative of Hoa Binh Volunteer Club (the 2nd from the left) is receiving a certificate of merit from Vietnam Youth Federation for outstanding achievements in implementing the youth volunteer movement in 2021.

In 2021, Hoa Binh Volunteer Club has had practical activities. Specifically, they have been participating in the prevention and control of Covid-19 epidemics in the locality. The club has called for more than 4 tons of food for the free kitchens in Tan Lac and Mai Chau districts; they have supported over 100 million VND for the difficult situations affected by the epidemics; they have given 500 sets of gifts including the necessities to Hoa Binh employees who were under the blockade in Hanoi; they have supported 5 free bus trips for the people in Dien Bien so taht they could come back to their hometown; they have donated 5,000 face medical masks to the checkpoints and the people of Mai Chau district… Every month, the club gives money to support 7 people for their disease treatment and they have built the clean water tanks with a total amount of nearly 100 million VND; In November 2021, the club donated 150 warm clothes and more than 1 ton of clothes to the people in Trung Thanh commune (Da Bac)…

With those achievements, in addition to the certificate of merit awarded Vietnam Youth Federation, the club's chairwoman, Mrs. Do Thi Dung, has received a certificate of merit from the Chairman of the Provincial People's Committee for the typical and excellent achievements in the emulation movement associated with "Study and follow Ho Chi Minh's thought, morality and style” in the period of 2016-2021. She has also got the Certificate of Merit from the Chairman of Hoa Binh City’s People's Committee for the achievements in the Red Cross’s movement in the period of 2016 - 2021. Ms. Do Thi Dung has also won the Award of 100 Youth Leaders Dedicating to the Community in 2019.