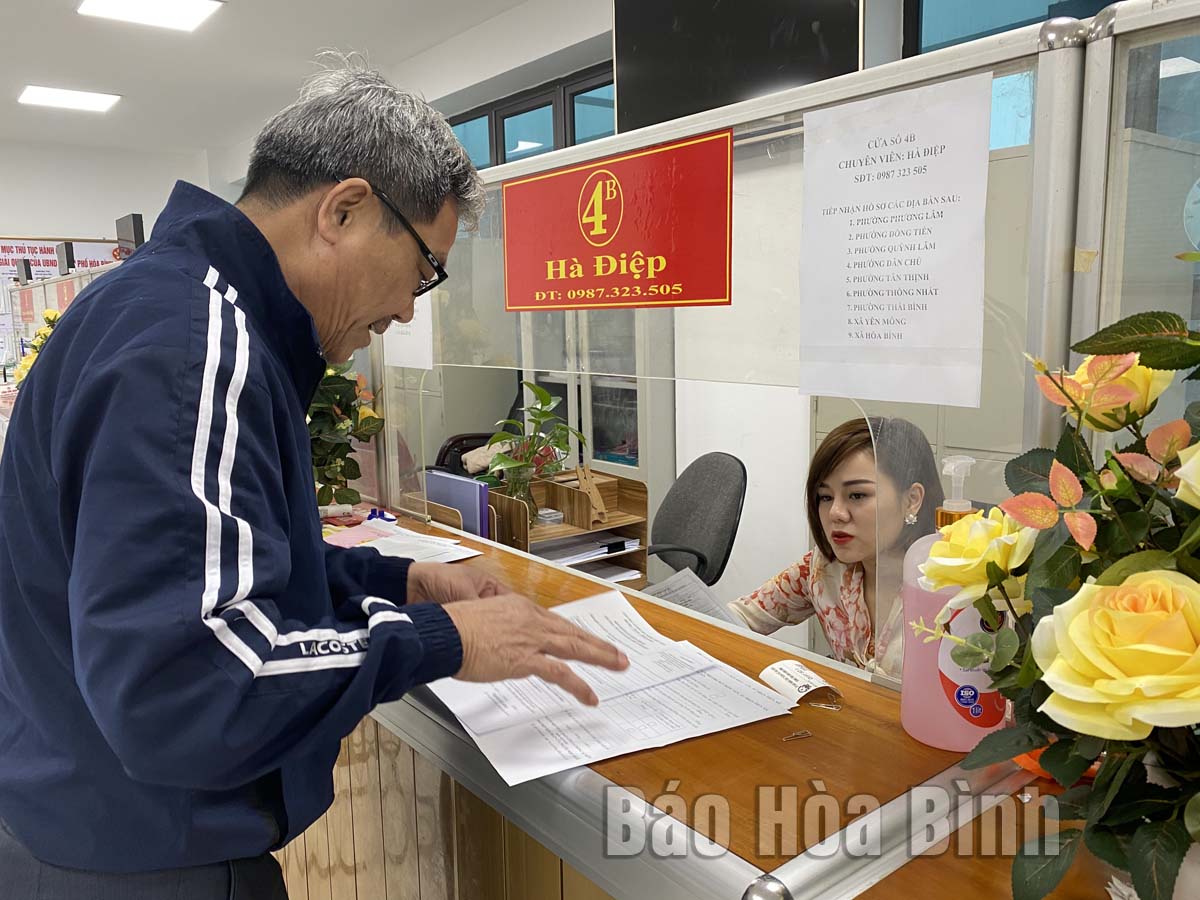 The "one-stop shop” department of Hoa Binh city publishes the phone numbers of the civil servants to contact and guide the use of online public services in handling the administrative procedures.

In 2021, the city carried out 222 out of the 268 administrative procedures at level 3 and 4, reaching 83%, receiving over 47,500 dossiers, while there were only more than 19,000 dossiers in 2022. This is an important result for the city to have the radical solutions, attracting more and more people and businesses to use public services at levels 3 and 4, gradually building a professional and modern administration. Especially at the time when Covid-19 epidemics is complicated, the city has promoted propaganda and mobilized the people and businesses to use public services to solve the administrative procedures. As a result, it has limited the contact and gathering of people, ensuring health safety. The form of submitting dossiers through online public servive also saves the travel time of the organizations and individuals. At the same time, it reduces the pressure of paperwork and work for the State management agencies, increasing the transparency in handling administrative procedures, and being agreed and supported by the people and businesses.

Mr. Nguyen Van Chuong from group 7, Phuong Lam ward said: Recently, I have a problem which needs to be solved through the administrative procedures. I find that using public services very convenient, I can submit an application for the administrative settlement with the State management agency at any time of the day, at a location with the internet connection. I am also provided with the timely and accurate information on the status of my application. In addition, with the public service at level 4, I can also pay fees and charges by electronic payment and receive the results at home if required without having to go to the state management agency or the result receiving and returning department of all levels.

According to Mr. Nguyen Huu Luyen, the Vice Chairman of the City’s People's Committee, in order to increase the efficiency of using public services, the City People's Committee has reviewed and selected the administrative procedures that people and businesses use a lot and they are not complicated to deploy. They are the business registration, housing construction permit, civil status correction, food safety, granting diplomas and certificates... They have issued many documents directing the implementation of public services at levels 3 and 4 for specialized offices, communes and wards. They have also been propagating and guiding the people and the businesses to access and use the service in various forms; propagandizing the benefits of public service at levels 3 and 4 on the city's website, loudspeaker systems, leaflets, and billboards, guiding the implementation of administrative procedures for handling administrative procedures by means of public services at levels 3 and 4. In addition, they have coordinated with the schools to organize a contest learning about public services, contributing to raising the awareness of the teachers and students, creating a strong influence on the parents, the families and the relatives of thr students. At the Department of receiving and returning results of the People's Committees of the city and the communes, there are civil servants to guide the organizations and individuals to register for public service accounts on the National Public Service Portal, the Provincial Public Service Portal, from which they can submit documents online. This department also actively guides the people and businesses to look up the results of administrative procedures by the applications of mobile phones and computers, and to pay fees and charges for the administrative procedure settlement by online form.

They have to speeding up the operation of the electronic portal, complete the database on organizations and citizens, focusing on upgrading the portal of the ward and commune to serve the provision of public services; paying attention to fostering and equipping IT knowledge for the contingent of civil servants who directly handle the administrative procedures for the organizations and the citizens, especially paying attention to recruiting and using a contingent of the civil servants and public employees in charge of IT in the State agencies to meet the requirements of IT application in providing public services.