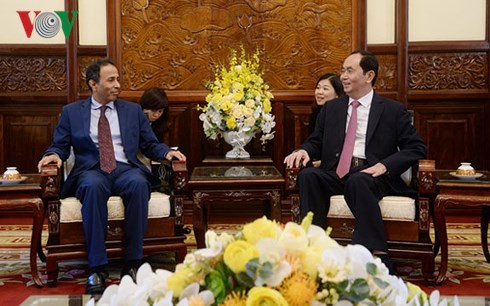 At a March 19 reception in Hanoi for the UAE diplomat who came to bid farewell before ending his tenure, the Vietnamese State leader hailed his contributions to reinforcing the bilateral friendship and all-around cooperation during his four-year tenure.

Quang expressed his joy at the flourishing Vietnam – UAE relations over recent years, noting that the UAE is among top trade and investment partners of Vietnam in the Middle East.

The UAE  ranks 7th  among Vietnam’s trade partners with two-way trade exceeding US$6 billion over the past 3 years.

The President said he hopes the outgoing Ambassador will continue contributing to the Vietnam – UAE friendship and cooperation in his new post and that both sides will go ahead with the implementation of their agreements as well as strengthening the exchange of business delegations and trade promotion activities.

He also praised the diplomat's efforts in conneting the Vietnamese Ministry of Industry and Trade and the UAE Chamber of Commerce and Industry to hold business forums between the two countries, particularly the Dubai – Vietnam trade forum in Hanoi in November last year.

In reply, Khalid Ibrahim Abdulaziz Shohail Al-Qahtani thanked Vietnam’s agencies and sectors for their cooperation and support during his term of office in the country.
He told his host that he appreciates his nation's fruitful cooperation with Vietnam, adding that after returning home, he will continue serving as a bridge bringing relations between the two countries to a higher level.
Source: VOV