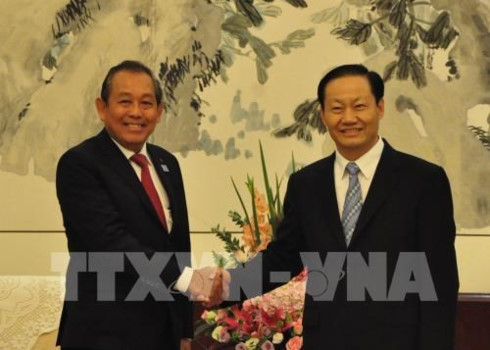 Deputy Prime Minister Truong Hoa Binh stated that bordering Guangxi province plays a very important role in cementing and developing the friendship and cooperation between China and Vietnam.
He made the statement at a meeting with Party Secretary of the Guangxi Zhuang Autonomous Region Peng Qinghua on September 12.
He said the two sides should maintain and enhance meetings of all-level leaders and people-to-people exchanges, especially between residents in the border area, thus contributing to boosting the comprehensive strategic cooperative partnership between Vietnam and China in a stable and sustainable fashion.
At the same time, it is necessary to make the best use of available cooperation mechanisms and step up collaboration in border management, Deputy PM Binh stressed.
The official also hailed cooperation outcomes between Vietnamese ministries, agencies and localities and Guangxi over the past time, especially in economy and trade, with Vietnam-Guangxi trade increasing by 15.3 percent in 2016 to reach US$25 billion.
Guangxi has become one of China’s model localities in cooperating with Vietnam, he noted.
For his part, Peng Qinghua affirmed that the Party Committee, authorities and people of the Guangxi Zhuang Autonomous Region always attaches importance to strengthening the traditional friendship and mutually beneficial cooperation with ministries, agencies and localities of Vietnam.
Guangxi hopes to work with relevant Vietnamese localities to develop transport infrastructure projects, and promote economic, trade and tourism links effectively and pragmatically, thus helping to diversify the friendly neighborliness and comprehensive cooperation between Vietnam and China.
Later the same day, Deputy PM Binh and his entourage visited the Zhongguancun Hi-tech Zone.
Binh was in the Guangxi Zhuang Autonomous Region to attend the 14th China-ASEAN Expo (CAEXPO) and the China-ASEAN Business and Investment Summit (CABIS).
He is scheduled to attend a ceremony marking the completion of the Vietnam-China Bac Luan II Bridge at the Mong Cai Border Gate in Vietnam’s northern province of Quang Ninh on September 13.
Source: VOV