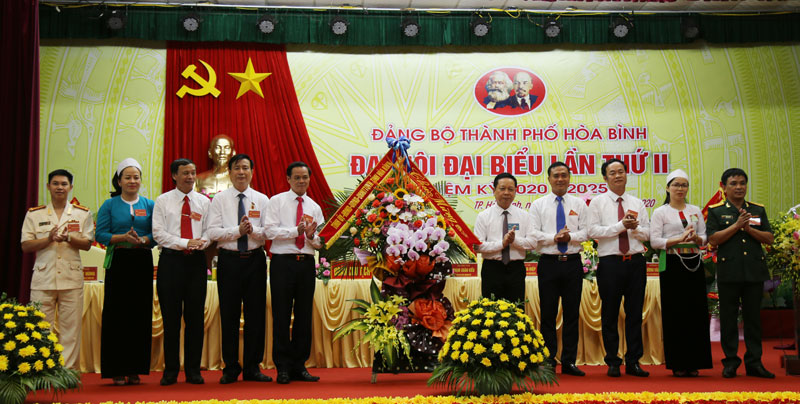 Bui Van Tinh, member of the Party Central Committee and Secretary of the Hoa Binh provincial Party Committee, presents flowers to congratulate the congress.
As the province’s political, economic, cultural and social centre, with Ky Son district merged into it, thanks to their efforts, solidarity and high resolve, the Party organisation, administration and people of Hoa Binh city have overcome numerous difficulties and challenges to successfully carry out the resolutions of the provincial Party Committee and the city’s Party organisation, thus obtaining major achievements in different aspects.
The Party organisation of Hoa Binh city has achieved and surpassed all the targets set in the resolutions of the 22nd Party Congress of the city and the 27th Party Congress of Ky Son district.
The local economic structure has been changed with the proportions of services, industry and construction increasing and agriculture shrinking. Budget revenue has continually been 18.06 percent higher than annual targets. Meanwhile, this year’s per capita income is estimated at 66 million VND (over 2,800 USD), and the household poverty rate has been brought down by 0.5 percent every year. Besides, Hoa Binh city is the first district-level locality of the province to be recognised as a new-style rural area.
It has pushed ahead with urban planning, construction and development management, recorded new strides in cultural and social aspects, and carried out poverty reduction and social welfare policies in a timely and effective manner. While politics, defence and security have been firmly guaranteed, the Party and political system building has gained important outcomes, greatly helping to improve the local Party organisation’s leadership capacity.
Addressing the congress, Bui Van Tinh, member of the Party Central Committee and Secretary of the Hoa Binh provincial Party Committee, applauded the achievements the city’s Party organisation has gained over the past years.
He stressed that building Hoa Binh city into a civilised and modern one that serves as a socio-economic locomotive is a heavy but also honourable task of the local Party organisation, administration and people.
Therefore, the second Party Congress of Hoa Binh city has a very important task, he noted, asking participants bring into play solidarity and their sense of responsibility to comment on the submitted documents, decide targets, tasks and solutions for the 2020-2025 tenure, and contribute opinions to draft documents to be submitted to the 13th National Party Congress and the draft political report to be submitted to the 17th provincial Party Congress.
Particularly, they need to adhere to the congress’s regulations and the Party’s election rules so as to choose outstanding Party members who have aspirations for innovation and breakthroughs for the new-tenure municipal Party Committee and build it into a united and prestigious one capable of leading the Party organisation to successfully implement the congress’s resolution, the official added./.