(HBO) - Studying and following President Ho Chi Minh (Uncle Ho)'s example, every day, Do Thi Nhung, the head of the Women's Union in Ward 6, Man Duc town of Tan Lac district, is always diligent and responsible in every word and job. 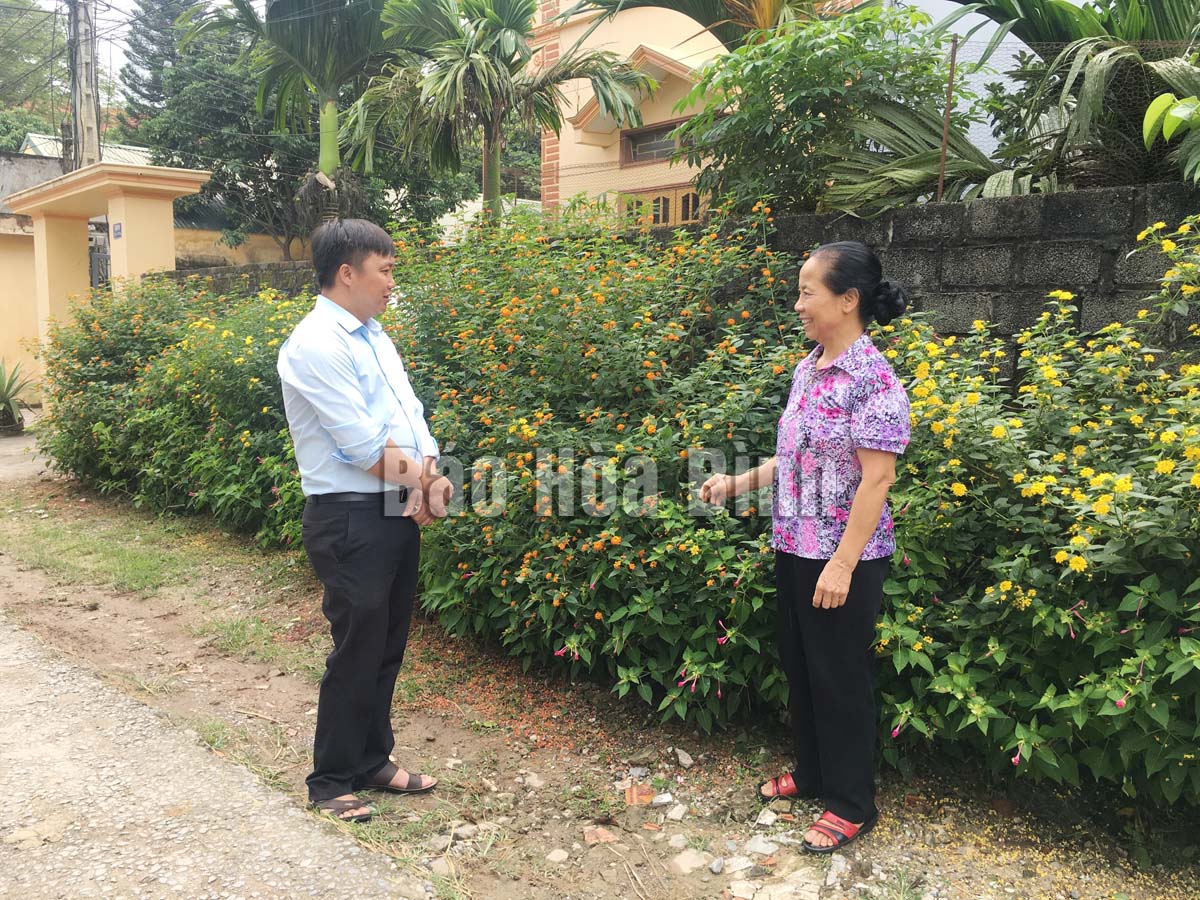 Photo: Do Thi Nhung, head of the Women's Union of Ward 6, and a representative from the Party Committee of Man Duc township (Tan Lac) visit the flower road model implemented by the union.

After nearly 40 years of service in the army, Nhung retired. Trusted by the local authorities and people, since 2010, she has been elected as the head of the Women's Union branch. At that time, Ward 6 was entering a period of strong development. The ward along National Highway 6 is densely populated. In addition to retired officials, most of the households engaged in trade and business, with high educational attainment but not equal. In the area, there are two schools, and one spontaneous market. The dissemination of the work to ensure traffic safety and avoid encroaching on roadways and sidewalks worried Nhung.

In 2016, the district Women's Union selected Ward 6 to build a model of "women's self-governing road associated with traffic safety corridor protection". Nhung said: "What has become a routine is not easy to change. In order to create consensus, the branch members not only have to set an example, but also often stay close to and grasp each local's thoughts in order to create consensus in awareness and action, and inspire solidarity strength."

As the branch leader, Nhung has pioneered the implementation first, sun or rain, and directly visited each household to encourage them to sign commitments to do business and trading without encroachment, violation of traffic safety corridors, actively protecting the environment on sidewalks. Therefore, the women's self-governing road associated with traffic safety corridor protection of Ward 6 has been successfully built.

Not betraying others’ trust, Nhung always turns her mind to the difficulties and the shortcomings of Ward 6; carries out practical actions and calls on others to join hands in implementation, thus creating a clear change in the locality. Nhung said it is never enough to study and follow Uncle Ho's example for each official and Party member. Therefore, she always tries to improve herself to better serve locals./.

(HBO) – Whenever possible, the two Lao women adopted by Luong Son Toan, a resident in Chieng Sai hamlet of Mai Chau township (Mai Chau district), amid numerous hardships in the past return to Mai Chau to visit their beloved Vietnamese family.

(HBO) - In the morning of August 31, on the occasion of the 77th anniversary of the August Revolution and the National Independence Day of September 2 (1945-2022), the delegation of the provincial leaders laid the wreaths, offering incense at Uncle Ho's Monument and visited the Martyrs Cemetery of Hoa Binh Campaign.

(HBO) - On the occasion of the 77th National Day of the Socialist Republic of Vietnam (September 2, 1945 - September 2, 2022), in the afternoon of August 30, Mr. Nguyen Phi Long, the alternate member of the Central Committee of the Party, the Secretary of the Provincial Party Committee visited and presented gifts to the officials and the people of Muong Khoi Revolutionary War Zone in An Nghia and Tan My communes (Lac Son). There were also the leaders of the Provincial Military Headquaters, the Provincial Youth Union, Department of Labor, War Invalids and Social Affairs, the District’s Party Committee, the People's Committee of Lac Son district accompanying.